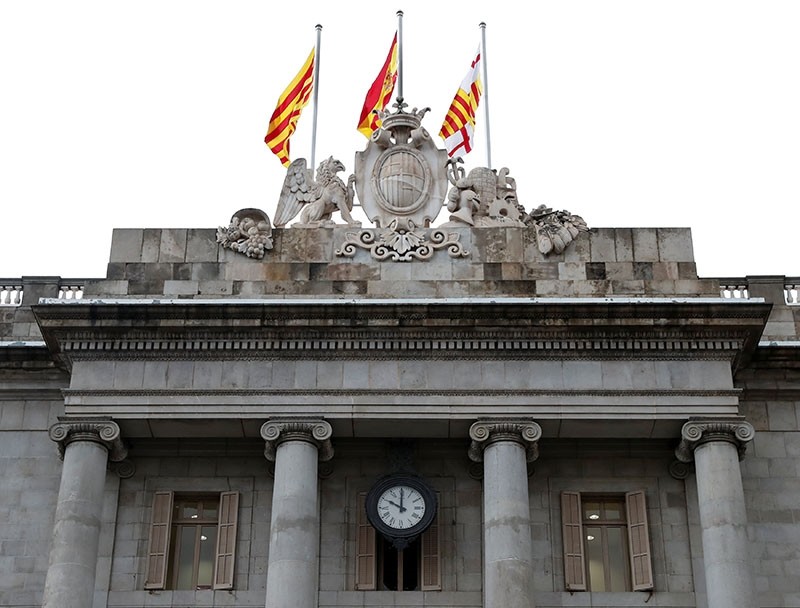 A clock on City Hall in front of the regional gov't HQ the Generalitat, is seen at ten o'clock, final deadline set by Madrid for Catalan leader Puigdemont to retract an ambiguous independence declaration, in Barcelona, Oct. 19, 2017. (Reuters Photo)
by Compiled from Wire Services Oct 19, 2017 12:00 am

Spain's government will trigger on Saturday the Article 155 of the constitution, which allows to suspend Catalonia's political autonomy, the Prime Minister's Office said on Thursday.

"The Spanish government will continue with the procedures foreseen by Article 155 of the Constitution to restore legality in the self-government of Catalonia," a statement said.

"Next Saturday the Council of Ministers, meeting extraordinarily, will approve the measures to be submitted to the Senate to protect the general interest of the Spanish, including the citizens of Catalonia, and to restore constitutional order," it added.

The special cabinet meeting was called after Catalan leader Carles Puigdemont said in a letter to Prime Minister Mariano Rajoy on Thursday that the regional parliament could vote on a formal declaration of independence from Spain if the central government failed to agree to talks.

"If the government of the [Spanish] state insists on refusing dialogue and continuing with repression, the Parliament of Catalonia can proceed, if it deems it appropriate, to vote on the formal declaration of independence," Puigdemont said.

With his latest letter, the Catalan leader has for the second time in a week dodged an ultimatum from Madrid to set aside secessionist bids, or else face the activation of Article 155 of the constitution, which would allow the government to suspend Catalonia's autonomy.

Puigdemont made the letter public only minutes before a 10 a.m. deadline he had been given by Rajoy to retract an ambiguous declaration of independence he made last week.

The crisis centers on an October 1 referendum on independence that was banned by the Constitutional Court and obstructed violently by Spanish police.

It went ahead, and Catalan authorities say an overwhelming, but unverified, result gives them a mandate to secede.