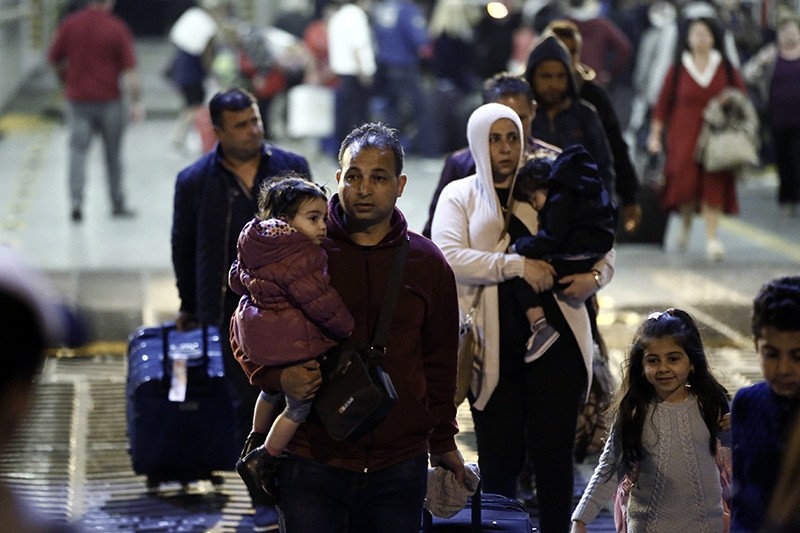 Refugees holding their children as they arrive with the 'Blue Star 2' passenger ship from the island of Samos, at the port of Piraeus, near Athens, Greece, 21 October 2017 (EPA Photo)
by Anadolu Agency Oct 21, 2017 12:00 am

Nearly 200 refugees were moved to camps in Greek capital Athens from Samos Island due to poor living conditions and overcrowding, according to the Ministry of Migration Policy.

The refugees, including many women and children, were welcomed by officials from the U.N. Refugee Agency (UNHCR) and the Ministry, and transported to various camps by buses, the ministry said Saturday.

According to Greek official figures, the number of refugees in the eastern Aegean Sea island is about 2,500 -- more than three times the camp's capacity of 700.

Earlier in October, the U.N. Refugee Agency had urged the Greek authorities to accelerate winter preparations in the refugee sites on the islands.

The UNHCR said in a statement that many refugees in the state-run camps were living "in small tents and shelters unsuitable for the winter."

The agency said the Greek authorities should ensure adequate shelters and distribute winter aid items as "conditions are quickly deteriorating amid increased arrivals while harsh, rainy and cold weather is expected."

The UNHCR added sea arrivals to Greece so far this year "have reached 20,000 and the majority were Syrian or Iraqi."