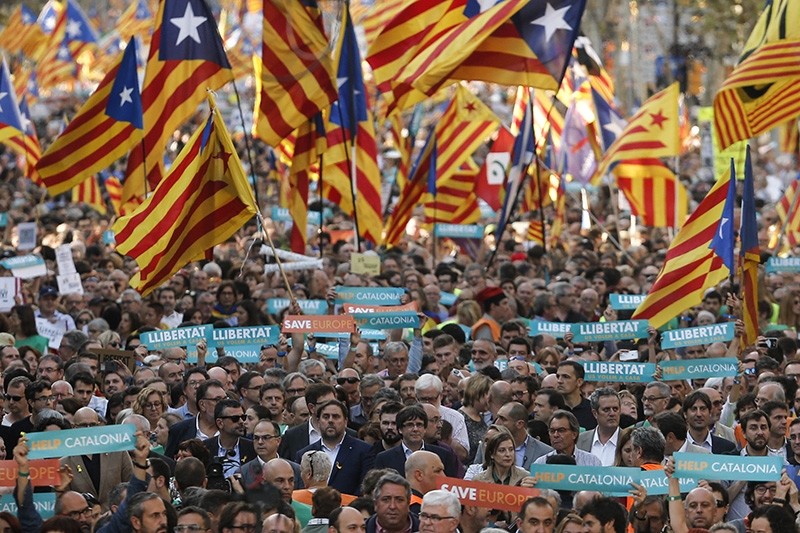 Catalan separatists Monday threatened "mass civil disobedience" if Madrid carries out threats to depose their leaders, as tensions mounted over a bid to sever the region from Spain.

Attitudes hardened at the start of a make-or-break week for Spain's deepest political crisis in decades, with firefighters, teachers and students also warning of strikes and protests.

Madrid stood firm on its plans to replace the government of the semi-autonomous region whose inhabitants voted "Yes" in a banned independence referendum on October 1.

Catalonia's separatist parties, in turn, called a special session of the regional parliament for Thursday to devise a response.

Observers fear this may amount to a unilateral declaration of independence that will spark unrest in the wealthy, northeastern territory and further afield.

Catalan President Carles Puigdemont and his team may be out of their jobs as soon as this weekend, Spain's Deputy Prime Minister Soraya Saenz de Santamaria insisted.

A meeting of the Senate, in which Prime Minister Mariano Rajoy's conservative Popular Party holds a majority, is expected to officially suspend the territory's limited self-rule by Friday.

Franco -- who ruled from 1939 until 1975 -- suppressed Catalonia's autonomy, language and culture.

"This assault will receive a response in the form of massive civil disobedience," warned the CUP, a key regional power broker.

Lluis Corominas, spokesman of the Together for Yes ruling coalition, branded the Spanish response "a case of unprecedented institutional violence.

"Spain... is not a democracy. Spain is acting like a dictatorship," he told journalists in Barcelona.

To stop Catalonia breaking away, Madrid will rely on never-before-used powers in an article of the constitution meant to safeguard "the general interests of Spain".

Until now, the region controlled its own policing, education and healthcare, but discontent has grown since the economic crisis by Catalans demanding more control over their own finances.

Madrid could wrest away control of the Catalan police force, replace the heads of its public news outlets, and take over the entirety of the regional government's finances.

But analysts say Madrid faces an uphill battle, especially if the regional government refuses to step down, and civil servants defy orders from central authorities.

Such rebellion could compel the Madrid to deploy the police, resulting in clashes "and further stoking separatist sentiment," according to an analysis by the Eurasia Group political risk consultancy.

Already, half-a-million separatists took to the streets of Barcelona Saturday after Rajoy announced he would replace Puigdemont.

On Monday, Catalan firefighters hinted they may refuse to obey orders from national authorities.

"It depends on what they ask us to do. If there is a road that is blocked and they send us to unblock it, maybe we won't go," said a spokesman for a firefighter association associated to the separatist movement.

Teachers called a protest march for Wednesday, and students said they will go on strike from Thursday.

Elections for a new regional government, which must be held within six months, could also backfire badly by yielding an even stronger mandate for secession, said the Eurasia Group.

The region of 7.5 million people is fiercely protective of its culture, language and autonomy, though polls indicate its inhabitants are divided on whether to break away from Spain.

Puigdemont says 90 percent of those who voted in the referendum backed a split, but turnout was estimated at 43 percent as anti-independence Catalans stayed away.

The crisis has rattled a European Union already grappling with Brexit.

European Commission president Jean-Claude Juncker reiterated his criticism Monday of what is happening in Catalonia, and warned against "separatism in Europe."

"I do not want the Europe of tomorrow to comprise 95 states," he said at a political debate in Strasbourg.

The number of firms that have moved their legal headquarters out of Catalonia has risen to 1,302, according to Spain's companies registry.