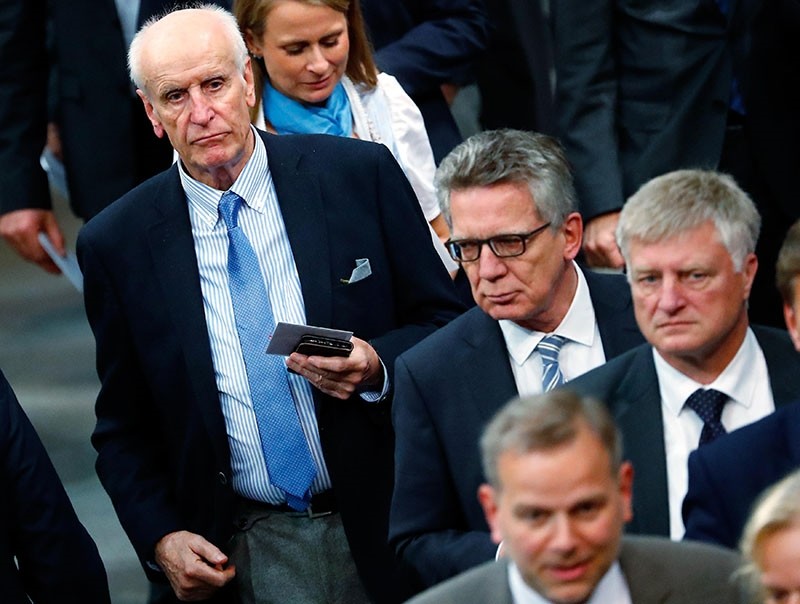 The far-right AfD Party has become the first major right-wing group to enter the Bundestag in Berlin since World War II, setting the stage for a turbulent new four-year legislative period

The opening session in German parliament reflected a more raucous atmosphere under the dome of Berlin's Reichstag building, where the far-right Alternative for Germany Party (AfD) declared that a "new era" had begun as its lawmakers took their seats for the first time. Far-right AfD Parliamentary Group Chairman Bernd Baumann immediately sparked an outcry by comparing himself to a victim of notorious Nazi Hermann Goering.

Setting the tone for more fractious parliamentary sessions in the next four years, the AfD Party was first off the mark in filing a motion to challenge a change in parliamentary rules that prevented one of its lawmakers from making the opening speech in the lower house.

As the motion was immediately defeated by the rest of the lawmakers, AfD Parliamentary Group Chairman Baumann wrongly drew a comparison to a move he claimed Goering made in 1933 to block Communist member of the Bundestag Clara Zetkin from opening the sitting.

Germany's DPA news agency swiftly corrected Baumann's account, noting that Goering's action had actually blocked a member of his own party rather than Zetkin from opening parliament that year.

Nevertheless, the AfD's quip drew gasps from the floor and was slammed as "tasteless" by Marco Buschmann of the liberal Free Democratic Party (FDP).

The clash between far-right German lawmakers and others became apparent at the Bundestag's first sitting, where the new parliamentary president, outgoing Finance Minister Wolfgang Schaeuble, called on lawmakers to react calmly to the new AfD members of the Bundestag.

German lawmakers have rejected by an overwhelming majority in a second round of voting a candidate for a key parliamentary post proposed by the right-wing populist AfD. The controversial 75-year-old candidate for the AfD received just 114 of the 685 votes cast in the final ballot for the position. A former local politician, Glaser has come under fire for questioning whether Islam respects the freedom of religion, during a speech delivered earlier this year.

Newly elected parliamentary president Schaeuble, a veteran member of Chancellor Angela Merkel's Christian Democrats' Union (CDU), was elected on Tuesday to the largely ceremonial post of speaker by a majority of 501 out of 704 votes cast in the ballot.

A member of parliament since 1972, Schaeuble told lawmakers that he looks "forward with calmness to the disputes that will be held in the coming years."

However, Schaeuble is likely to need to utilize all of his political authority as the country's longest-serving lawmaker in order to keep a firm grip on the possibly unruly new Bundestag, which is now comprised of a record six parliamentary factions in what is the world's biggest democratic parliament.

Excluding the AfD, the other five blocs represented in the Bundestag, namely the pro-business Free Democratic Party (FDP); the environmentalist Greens, the center-left Social Democrats, the hard-left Die Linke and the conservative CDU - together with its Bavarian-based allies the Christian Social Union (CSU) - each secured deputy president spots.

The four parties are under pressure to find common ground on contentious issues such as the future of the euro zone and immigration policy, as well as fiscal policy. The untested three-way alliance with the Greens and the FDP - the so-called Jamaica coalition - is currently the only option available for German Chancellor Angela Merkel.