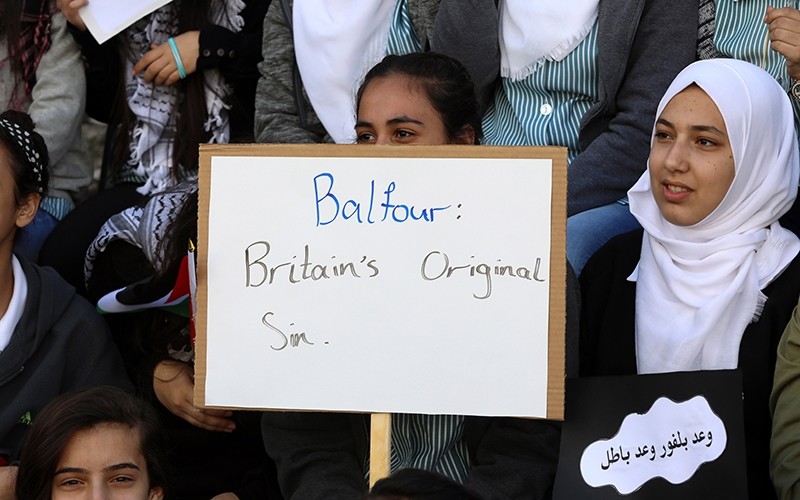 Palestinian students hold banners during a protest against the Balfour Declaration on its 100th anniversary, in Al Fatmiya school, at the West Bank City of Nablus, 01 Nov. 2017 (EPA Photo)
by Anadolu Agency
Nov 02, 2017 12:00 am

British opposition figures are urging Prime Minister Theresa May to recognize a Palestinian state as she prepares to host Israel's Benjamin Netanyahu to mark the centenary of the Balfour declaration Thursday evening.

Emily Thornberry, shadow foreign secretary for the main opposition Labor Party, thinks the centenary could be a good time for the U.K. to officially recognize Palestine.

"It seems to me that it was right to be a true friend of either side; you need to recognize the legitimate concerns of both parties," Thornberry told Anadolu Agency.

"One of the things about Balfour that strikes me is that it … reinforces to me a very important reminder that when British politicians clearly state their policies on the Middle East that these words can make a difference," she said.

Thornberry will represent Labor at a celebratory dinner to be hosted by Lord Jacob Rothschild and Roderick Balfour -- the representatives of Rothschild and Balfour families -- after party leader Jeremy Corbyn's previous announcement that he would not attend.

"The Conservative government say they will recognize a Palestinian state but doesn't say when they will do it," she added.

"And we say, do it on the 100th anniversary of the Balfour Declaration. We have to recognize Palestine. If this government is not prepared to recognize a Palestinian state, the next Labor government will.

"What is important is that we fulfil the whole promise and we have a role in this... We have a responsibility to do everything that we can in order to ensure that there is proper two-state solution."

The Labor shadow minister is not the only lawmaker who thinks now is the time to recognize a Palestinian state.

Tom Brake, the Liberal Democrat lawmaker for Carshalton and Wallington, says Palestinians are entitled to a state such as much as Israelis.

"And that has got to be the starting point and that is what collectively and cross party we have to try and get the government to accept," he added.

Noting that the House of Commons "has already voted to recognize Palestine," Brake said: "We might be able to secure that [recognition] because the government does not command a large enough majority to oppose such a measure."

Brake said the Palestinians had been let down and for them "there is nothing to celebrate."

"We didn't deliver on half of the promises that we have made a hundred years ago; that's why we have to keep the focus on that, try to ensure that we use the historical connection we have to deliver for the Palestinian people a hundred years after we first said we would."

Israeli Prime Minister Benjamin Netanyahu arrived to celebrate the centenary of the declaration on Wednesday. He is expected to meet Prime Minister May and Foreign Secretary Boris Johnson before attending Thursday's dinner.

British lawmakers last week urged the government to honor all aspects of the 1917 Balfour Declaration, which 100 years ago set out the U.K.'s support for a Jewish homeland in Palestine.

A debate took place at the House of Commons a few hours after May reiterated that her government would mark the centenary of the declaration "with pride."

"We are proud of the role that we played in [the] declaration of the state of Israel and we will certainly mark the centenary with pride. And I am also pleased of the good trade relations and other relationships with Israel," May said at a weekly questions session in front of lawmakers.

"We also must be conscious of the sensitivities that some people have about the Balfour Declaration and we recognize there is more work to done. We remain committed to the two-state solution in relation to Israel and [the] Palestinians," she added.