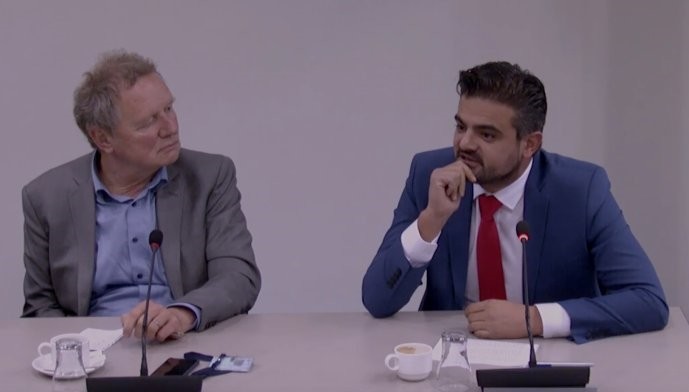 Tunahan Kuzu, leader of the Dutch DENK (Think) Party, slammed Cumhuriyet daily's fugitive former Editor-in-chief Can Dündar on Friday for trying to set Dutch and Turkish people at odds by bringing his case to the Netherlands.

Kuzu's comments came after Dündar confessed in the Dutch Parliament to leaking state secrets and publishing them.

"We, as the Denk Party, do not want to import Turkish cases to the Dutch parliament," Kuzu said.

"Your visit [to the Dutch parliament] is not in the interest of the relationship between Turkey and the Netherlands or its citizens, and especially not of the Turkish people living here," he asserted.

Reiterating that the Netherlands places great importance on the freedom of the press, Kuzu asked Dündar "how [he] reflected on the fact that he [knowingly] leaked state intelligence, which is a punishable crime both in Turkey and the Netherlands."

Pointing out that those who commit such a crime can face up to 15 years in prison, the Turkish-Dutch politician said Dündar's visit only served as "a podium for people bashing Turkey and Turkish citizens in the Netherlands."

Dündar, along with Cumhuriyet's Ankara representative Erdem Gül, face espionage and terror-related charges over a news story published by the newspaper last year regarding a raid against trucks belonging to the National Intelligence Directorate (MIT). The raid was deemed unlawful by judicial authorities and prosecutors, and soldiers and others involved in the raid in southern Turkey currently face trial. The Gülenist Terror Group (FETÖ) and affiliates are accused of masterminding the raid, which disclosed a secret MIT operation.

The Denk Party was formed in 2015 by ethnic Turkish lawmakers Kuzu and Selçuk Öztürk after their expulsion from the Labor Party, whose integration policy they opposed. The party has not only attracted votes from expatriate Turks, but also from people from various backgrounds opposing discrimination and racism.