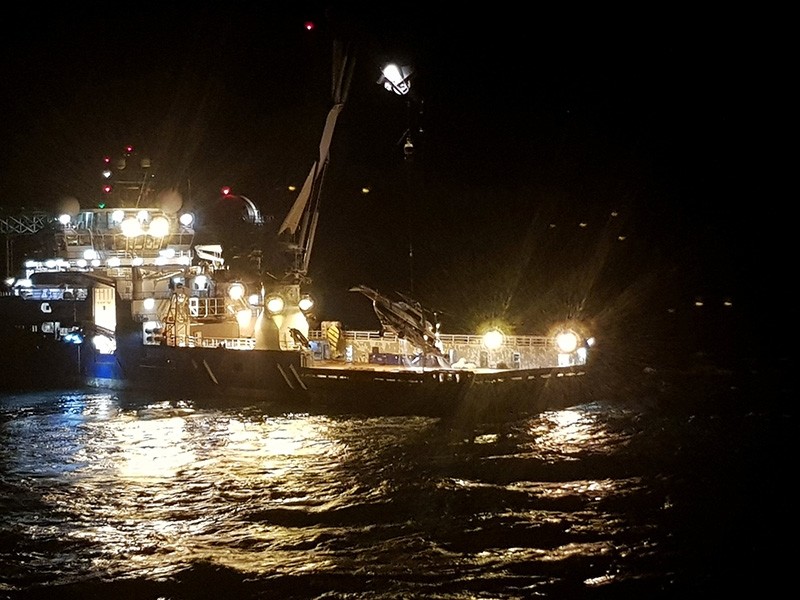 The Russian Mi-8 helicopter which crashed off the Arctic archipelago of Svalbard on Thursday is seen lifted up on on the deck of the Maersk Forza ship, near Barentsburg, off the coast of Svalbard, Norway November 4, 2017. (Reuters Photo)
by Compiled from Wire Services
Nov 04, 2017 12:00 am

A Russian helicopter that crashed last week off the Arctic archipelago of Svalbard was raised early Saturday from the sea floor, but no bodies were found onboard, Norwegian authorities said.

Eight Russian nationals, three of whom were polar scientists plus a five-man crew, were on the Mi-8 helicopter, which crashed on October 26.

A special offshore vessel, the Maersk Forza, equipped with a large crane, was deployed in the salvage effort.

Russian divers and a specialist from the Mi-8 manufacturer were also at the scene, just off Spitzbergen, the main island in Svalbard.

The wreck was raised from a depth of about 209 meters. The salvage team have recovered the fuselage, rotor and tail of the helicopter, the Norwegian Accident Investigation Board said in a statement.

"Police will continue to search for the [seven] missing bodies," William Bertheussen of the Accident Investigation Board told Norwegian public broadcaster NRK.

One body was retrieved on Tuesday roughly 130 meters from the helicopter wreck.

The helicopter went down near Barentsburg, around 2 kilometers (1 mile) east of Cape Heer. It came from the Russian hamlet of Pyramiden, a largely abandoned mine that attracts some tourists on excursions to see the empty Soviet-era buildings.

Barentsburg, the Arctic archipelago's second-largest settlement, is a Russian coal-mining town of about 500 people.

Under an international 1920 treaty, Norway has sovereignty over Svalbard, which is 800 kilometers (500 miles) north of its mainland. Other signatory countries have rights to exploit the archipelago's natural resources, including Russia.

Formerly known as Spitzbergen, the archipelago is known for stunning snow-covered mountains, fjords and glaciers.