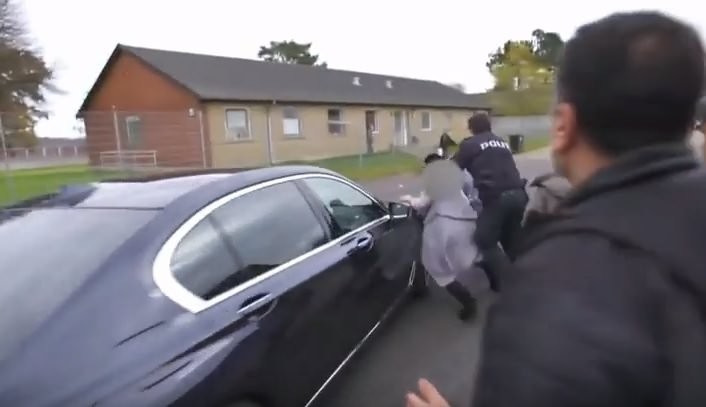 A screenshot from the video published by DR shows the refugee woman being hit by the minister's car.
by Daily Sabah Nov 04, 2017 12:00 am

Danish Minister for Immigration, Integration and Housing Inger Støjberg's car hit a refugee woman and nearly ran her over on Friday while trying to hastily leave a deportation center for rejected asylum seekers.

A video posted by the Danish Broadcasting Corporation (DR) showed Støjberg being escorted by her security detail and police officers as a crowd of disappointed refugees protested her short visit. Her government-issued car then tried to make a quick escape but hit a refugee woman who was trying to stop the vehicle from leaving, making her fall onto the ground.

The refugee woman, who was nearly run over by the car, is said to have only suffered minor injuries and is not in serious condition, police said.

The minister had finished interviewing a Kurdish family from Iraq about the conditions for children living at the facility when tension suddenly escalated and other refugees started to gather around the minister's car.

Her visit to the Sjælsmark deportation center was for a special segment for the 21 Søndag (Sunday) program with Johanne Schmidt-Nielsen (EL), a deputy of the Red-Green Alliance (Enhedslisten). 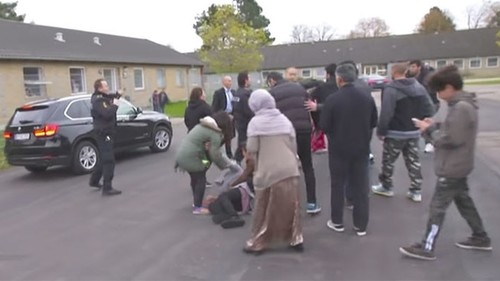 Sjælsmark resident Valid Rahmati said he could "understand why" people were so angry.

"They had baked cakes, bought flowers and made signs on which the words 'we are not criminals' are written. But we all have problems, and all she did was go in and talk to one chosen family," he told Danish daily Politiken.

Olav Hergel, a journalist at the scene, said that the unrest might have emerged after rumors spread that the family interviewed would be granted asylum in the country. 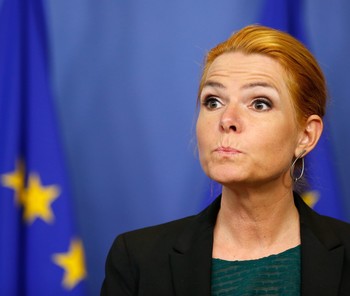 Last month Minister Støjberg reposted on Facebook an insulting cartoon of the Prophet Mohammed, depicting him with a bomb in his turban.

Three Danish embassies were attacked and at least 50 people were killed in rioting in 2006 in the Middle East, Africa and Asia, after drawings of the Prophet Muhammad, images many Muslims consider blasphemous, were published in the Danish newspaper Jyllands-Posten.

The picture Støjberg shared was one of those cartoons.

Denmark, known for its long history of high human rights standards, tolerance and openness, has become the least attractive country in Europe for refugees and asylum seekers thanks to its anti-refugee policies. The country has not only reinstated border controls to stem the flow of refugees into the country, those who are already in the country have been slapped with a new refugee law that aims to make the country an unwanted destination for migrants, scaring them away by imposing harsh policies; stripping refugees of jewelry to pay for their aid and potentially sending them to state-backed refugee villages with extended waiting periods for family reunification of up to three years.