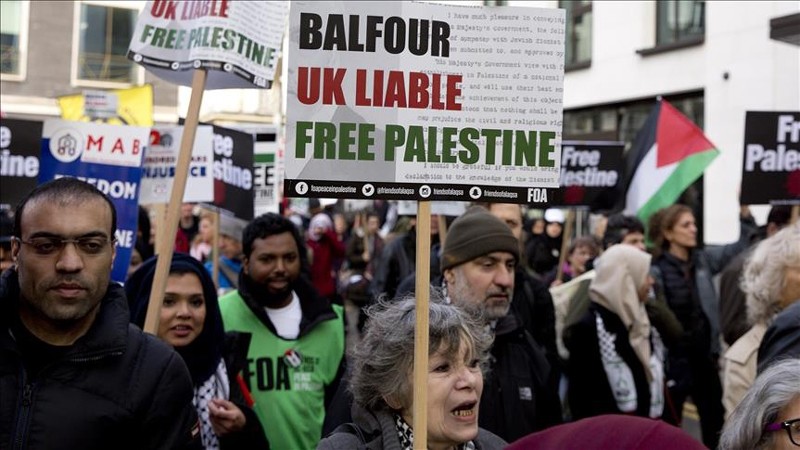 A number of British and Palestinian non-governmental organizations on Saturday demonstrated against the Balfour Declaration that set the stage for a Jewish state in the Middle East.

Dozens of members of the Friends of Al-Aqsa (FOA), Palestinian Forum in Britain (PFB) and the Muslim Association of Britain (MAB) came out in London to protest the 100th anniversary of the declaration.

The public statement by the then U.K. Foreign Secretary Arthur Balfour announced support for "a national home for the Jewish people" in Palestine.

The demonstration started in front of the U.S. Consulate in London from where protesters marched down the Piccadilly Street and reached the Parliament Square in Westminster.

One of them was an author Justin Butcher who told Anadolu Agency that he, along with his friends, had just returned from a five-month march from London to Jerusalem, passing through 11 countries including Turkey.

"We walked in sorrow, as a penalty and an apology from the British people for 100 years of suffering and injustice caused by the Balfour Declaration," he said.

Earlier this week, British Prime Minister Theresa May met her Israeli counterpart Benjamin Netanyahu and attended a dinner marking the centenary of the Balfour Declaration.

During a two-and-a-half hour meeting, May said: "The U.K. is proud of the role that we played in the creation of the state of Israel and we mark the 100th anniversary of the Balfour Declaration today with pride and respect."