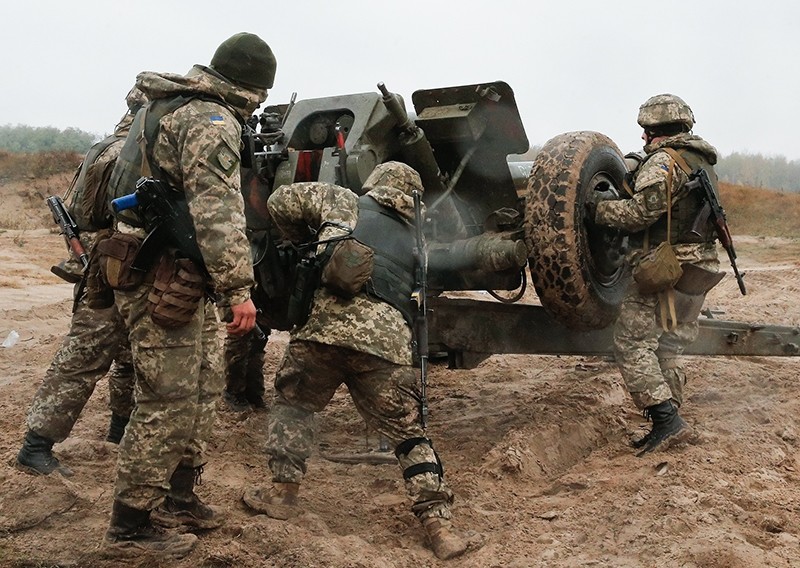 Ukrainian servicemen prepare a 122-mm towed howitzer D-30 to fire during a military exercise on the Devichki shooting range, about 85 km of capital Kiev, Ukraine, 26 October 2017 (EPA Photo)
by Compiled from Wire Services Nov 08, 2017 12:00 am

Ukraine's Cabinet adopted a decree on Wednesday, canceling an agreement with Russia for the supply of weapons and military equipment.

The deal regarding the mutual supply of arms and military equipment, components and spare parts, and the provision of repairs and other military services was signed Feb. 8, 1995.

The Ukrainian government in August had canceled an agreement with Moscow establishing interaction in the export of military goods to third countries.

Along with the U.N., the U.S. and the EU, Turkey does not recognize Crimea as Russian territory.

Since the annexation, Ukraine has been wracked by conflict in its eastern regions with Russian-backed separatists, leading to more than 10,000 deaths, according to the U.N.

Meanwhile, the Kremlin said that a reported plan by Ukraine to cut all diplomatic ties with Russia would further deepen a crisis between the two countries and end up hurting the interests of both Ukrainians and Russians.

Kremlin spokesman Dmitry Peskov, speaking on a conference call with reporters, was responding to a report in Russia's Kommersant newspaper which said that the Ukrainian parliament was expected to vote to cut all diplomatic ties on Nov. 16.