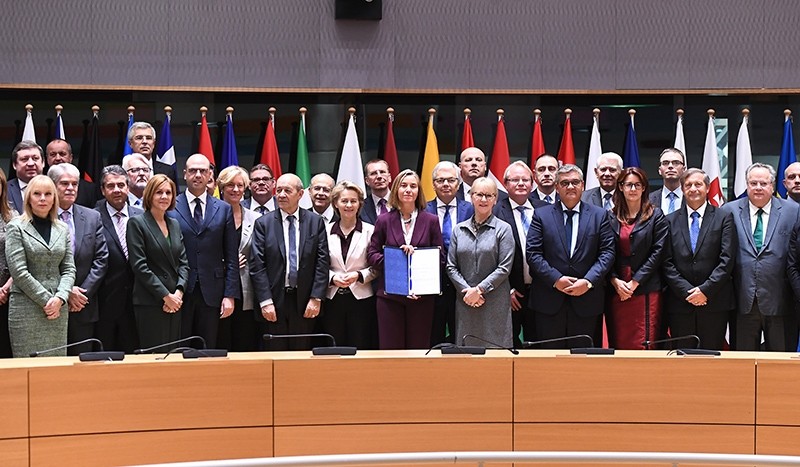 European Union countries have officially launched a new era in defense cooperation Monday with a program of joint military investment and project development to help the EU confront its security challenges after Brexit and as Russia flexes its muscles to the east.

Twenty-three of the EU's 28 member states signed up to the program, known as permanent structured cooperation, or PESCO. Britain, which is leaving the EU in 2019, and Denmark with a defense opt-out were among those not taking part. PESCO seeks to improve EU coordination on defense and weapons systems development.

It is part of efforts led by Germany and France to reboot the European Union after Britain's shock decision to quit and follows the announcement in June of a 5.5-billion euro ($6.4 billion) European Defense Fund.

According to Mogherini, PESCO, backed by the EU defense fund, "will enable member states to use the economy of scale of Europe and in this manner to fulfil the gap of output that we have."

Similar efforts to deepen military links have been frustrated for decades, partly by Britain's fierce opposition to anything that might lead to a European army.

But Brexit and Russia's illegal annexation of Crimea in 2014 has once again brought the need for a strong European security stance back into focus.

The shift in U.S. policy under President Donald Trump — who berated European partners on military spending at a NATO summit in May — has also led many to question whether Washington can be relied upon to protect Europe as it has in the past.

"It was important for us especially after the election of the American president that we can organize ourselves independently as Europeans," German Defense Minister Ursula von der Leyen said.

"This is complementary to NATO, but we also see that nobody will solve the security problems that Europe has in its neighborhood — we have to do it ourselves."

NATO will retain its primary role, but Mogherini said the EU could offer resources the alliance does not have, such as navigating security and development issues in Africa.

PESCO could, in theory, lead to the creation of a European operational headquarters or logistics base, but will first focus on projects to develop new military equipment such as tanks or drones.

The agreement commits countries to "regularly increasing defense budgets in real terms" as well as devoting 20 percent of defense spending to procurement and two percent on research and technology.

Mogherini said that by coordinating their efforts, European countries would get better value for money in defense.

"The real issue is not how much we spend but the fact we spend in a fragmented manner," she said.

The deal also binds countries to provide "substantial support" in areas, including personnel, for EU military missions — an area that has proved problematic in the past.

Countries signing up to PESCO will be subject to an annual review to make sure they stick to their commitments — and could be thrown out if they do not.

After Monday's ceremony, the deal is set to be formally launched on the eve of the next EU summit in December, at which point it will become legally binding.

Paris and Berlin offered competing visions for the pact, with France pushing for a smaller group of nations to commit to ambitious projects including possible foreign interventions such as in Libya or Mali.

Germany wanted as many countries as possible to sign up but for it to undertake more modest schemes, and Berlin's vision looks to have won the day.

Frederic Mauro, a defense expert who advises the European Parliament, said he was "deeply skeptical" about the final form of the pact, describing it as "light years" away from the concept of defense cooperation foreseen in EU treaties.

"The Germans say respect unity and proceed modestly at the start with... all these little projects — they won't help the EU's independent capacity," Mauro told French Press Agency (AFP). "It has no chance of working."

New projects will require unanimous approval of all countries signed up for PESCO, making it harder to get agreement on contentious issues.

Britain, which is leaving the EU, and Denmark, which has an opt-out in defense matters, did not sign, along with Ireland, Portugal and Malta.

British foreign minister Boris Johnson said that even though it was not taking part, the UK saw promise in PESCO and pledged to be "supportive". Member states who choose to sit out now can join later — subject to approval by the early adopters.

Countries that are not in the EU can also take part in specific missions — opening the way to possible participation by nuclear power Britain after it leaves the bloc in 2019 — though they will have no role in decision-making.