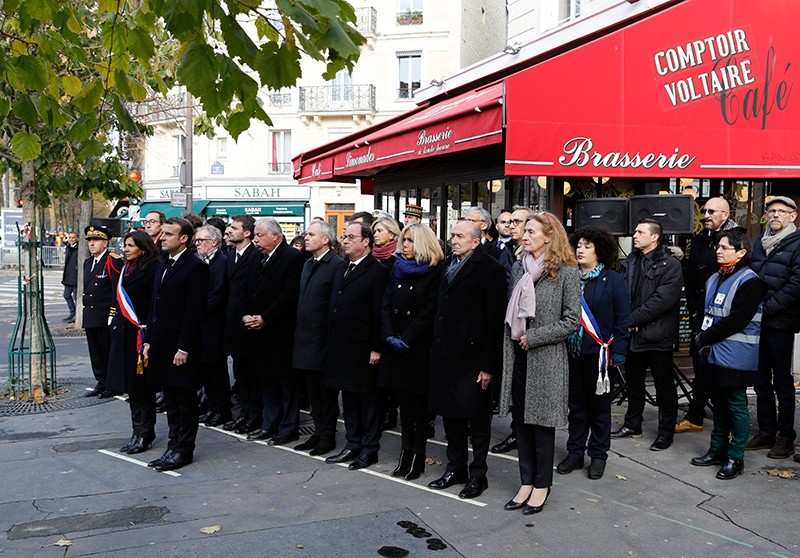 France on Monday marked two years since its worst ever terror attacks, when terrorists killed 130 people in Paris and injured hundreds of others.

"Two years on, Paris remembers," the city's mayor Anne Hidalgo tweeted, with the hashtag "Fluctuat Nec Mergitur" — battered but not sunk, Paris' motto — which became a defiant slogan after the attacks.

President Emmanuel Macron was laying wreaths at the six locations where Daesh-linked gunmen and suicide bombers struck Nov. 13, 2015, targeting the national stadium as well as bars, restaurants and the Bataclan concert hall.

Accompanied by his wife Brigitte and his predecessor Francois Hollande who was president at the time, Macron began his tributes at the Stade de France stadium north of the city where a suicide bomber killed one person.

Families of the victims joined their minute of silence and were due to join commemorations at the Bataclan, where 90 were gunned down and blown up during a gig by U.S. rock band Eagles of Death Metal.

Macron was due later to meet members of victims' group Life for Paris as they released balloons into the skies over the capital to remember the dead.

The attacks profoundly shook France, triggering a state of emergency that was only lifted this month after Macron signed a controversial new anti-terror law.

The law gives authorities sweeping powers to search homes, shut down places of worship and restrict the movements of suspected extremists.

Some 7,000 troops meanwhile remain on the streets under an anti-terror operation known as Sentinelle, carrying out patrols and guarding vulnerable sites such as tourist hotspots.

The Paris attacks were among a series of terrorist assaults that have left more than 240 people dead in France since 2015, starting with the shooting at satirical magazine Charlie Hebdo.

The sprawling police investigation into the Paris attacks continues following an international manhunt for Salah Abdeslam, the only man directly involved in the attacks to have survived.

Abdeslam, a 28-year-old petty delinquent turned terrorist, was captured in a dramatic police operation in Brussels in March 2016 after four months on the run.

Police had hoped he could provide a wealth of information about the planning and execution of the attacks, but he has so far refused to cooperate with the investigation.

The attacks ushered in nearly two years of state of emergency, replaced just two weeks ago with a tough law allowing police wider latitude against anyone suspected of links to terrorism. The state of emergency didn't prevent subsequent extremist violence, including a truck attack on holiday revelers on the Mediterranean shore of Nice.

While Daesh terrorists have been ousted from their Syrian stronghold of Raqqa where the Paris attacks were planned, French authorities remain on guard, and the French military remains active in the U.S.-led military coalition against Daesh.