Poles march alongside other European nationalists in Warsaw 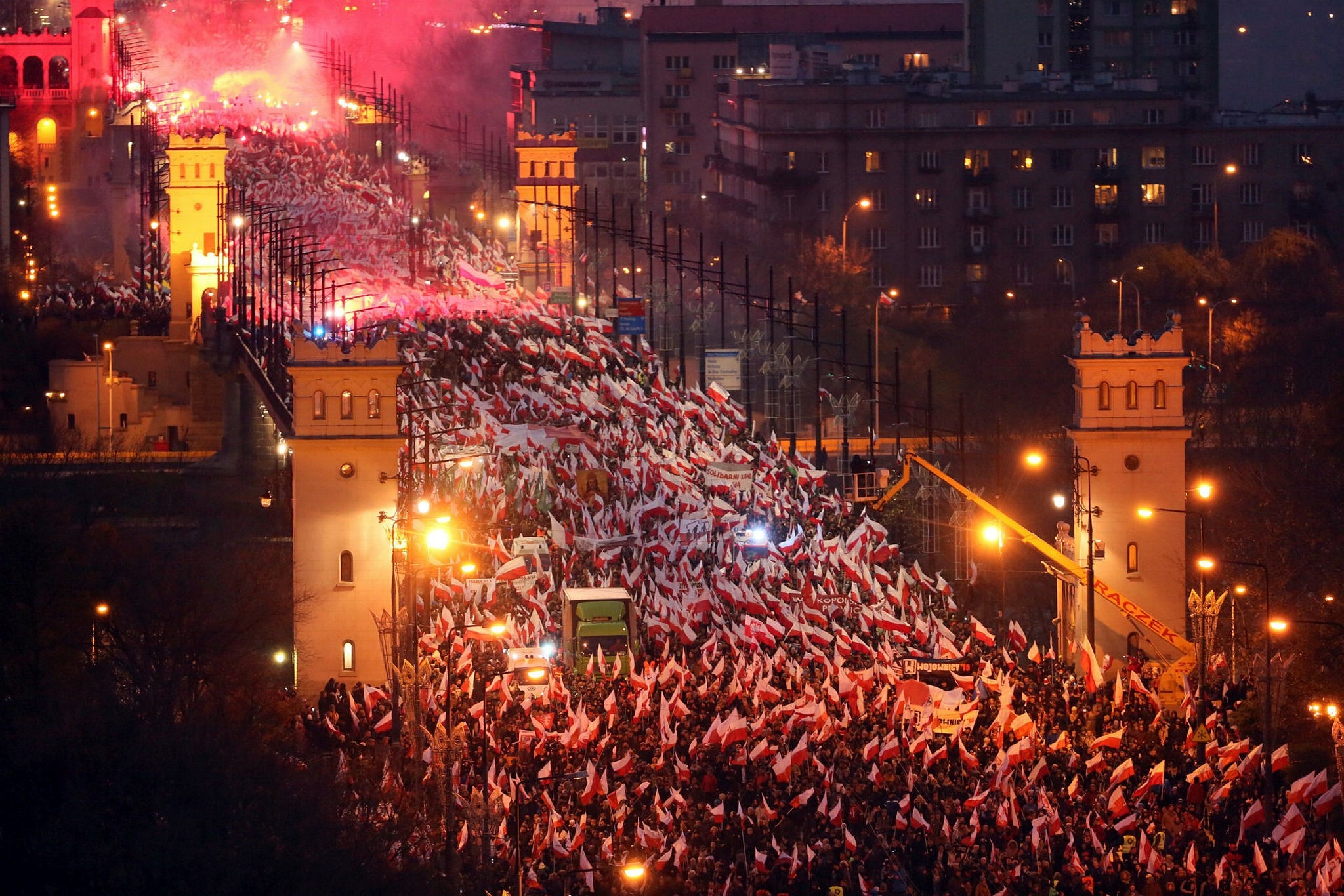 As Poland celebrated its independence day, 99 years after the Armistice of Nov. 11, 1918, tens of thousands of nationalists rallied in the streets of Warsaw

Out of the ashes of the Great War, 99 years ago, a reborn Polish nation was established. Poland celebrates this Independence Day from the old powers on Nov. 11, the same day as the Armistice of 1918 that ended the war.

The events that take place on Nov. 11 in Poland have increasingly been characterized in the past years not only by an assertion of Polish national self-determination, but also a rejection of the European Union's globalist mindset.

Some of the nationalists who participated in the road flare-heavy rally were seen holding black, white and red Polish Falangist flags, a variant of the National Radical Camp Falanga, a Polish nationalist movement, somewhat associated with Francisco Franco's Falangism in the 1930s.

While the movement was officially dissolved due to the German-Soviet occupation of Poland, its members went on to become resistance fighters with the Konfederacja Narodu (Confederation of the Nation), later joining the Armia Krajowa around in the fall of 1943.

The remnants of the movement today can been seen in the form of the National Movement (RN) party, founded in 2012, associated with several nationalist and far-right movements across the nation, including the All-Polish Youth as well as the libertarian Real Politics Union.

While Police estimate that from the 60,000 to 100,000 people who partook in the rallies, about 30 percent were considered to be far-right.

Some were heard chanting slogans such as "White Europe of brotherly nations," "God, honor, country" and "Glory to our heroes."

Other, more strong-minded political messages were also echoed in the rally, such as "refugees out" and "pure Poland, White Poland."

While some participants who rallied in Warsaw did so under atheistic, nationalistic banners, others marched under religious imagery, chanting "We Want God," which alluded to an old Polish religious song that U.S. President Donald Trump had excerpted during his visit to the polish capital earlier this year.

Reports indicate that not only Poles, but also other Europeans participated in the events, including popular Eurosceptic and nationalist figureheads, such as Tommy Robinson from Britain and Roberto Fiore from Italy.

Despite criticism that the Polish government espouses far-right views, it did not welcome American Alt-Right figurehead Richard Spencer into the country.

The Polish Interior Minister, Mariusz Błaszczak, called the event a "beautiful sight. We are proud that so many Poles have decided to take part in a celebration connected to the Independence Day holiday."

Indeed, while several Falangist flags could be spotted, they were completely drowned out by the overwhelming presence of the Polish national flag, as well as those wearing that flag as an armband, just as the Polish resistance fighters, including those of the Home Army used to do.

Several rallies have taken place in Poland in the last couple years, in which hundreds of thousands of people had participated, most of them criticizing the European Union's and German Chancellor Angela Merkel's unpopular decision to de-facto open the continents borders to millions of asylum seekers and, by consequence, illegal immigrants.

Poland had gotten into a fierce battle with the European Union over imposed immigration quotas that it refuses to follow, saying that the will of the Polish people go against such directives.

The claims of the Polish government are backed up by extensive research conducted by the Royal Institute of International Affairs, the Chatham House, earlier this year, finding that Over 70 percent of Poles and nearly 60 percent of all Europeans believe that all Muslim immigration should cease.

And to this day, Poland has refused to take in immigrants.Commenting on the situation, Polish politician Władysław Kosiniak-Kamysz had said that, "Poland will never close its doors to orphans, but let the young men fight for the freedom of their countries."