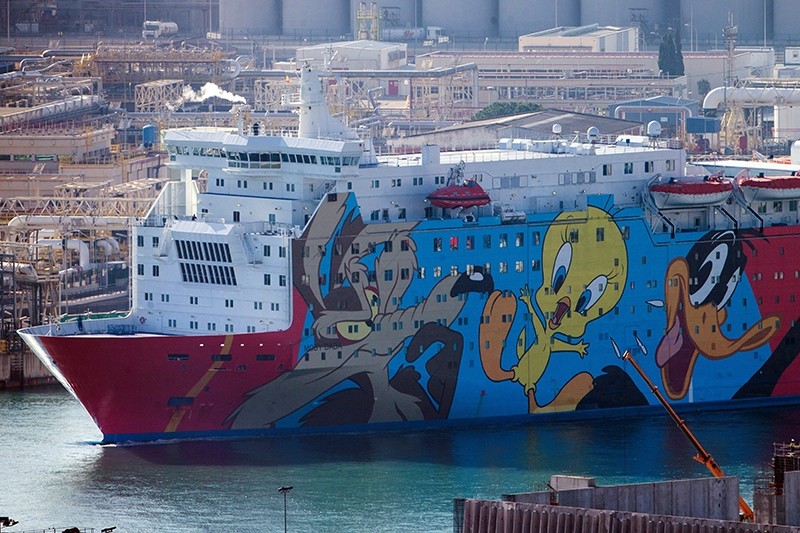 A view on the cruise ship 'Moby Dada,' that served as floating hotel for the Spanish police deployed to Barcelona to prevent the celebration of the Catalan independence referendum, leaves the port of Barcelona, Spain, Nov. 16, 2017. (EPA Photo)
by Anadolu Agency
Nov 16, 2017 12:00 am

A massive ferry painted with giant Looney Tunes cartoon characters, which acted as a temporary home to hundreds of Spanish police in restive Catalonia, sailed out of a Barcelona port on Thursday.

The ferry had been docked for 57 days, arriving in advance of Catalonia's independence referendum on Oct. 1.

Before the independence poll, which was met by a controversial police crackdown, thousands of Spanish National Police and Civil Guards were brought into the defiant northeastern region.

However, police say housing for all the outside officers was problematic, so police rented three large ships to provide temporary shelter during the operation against the referendum and separatist government.

One of these ships was a massive ferry painted with Looney Tunes characters — including children's favorites such as Wile E. Coyote, Tweety Pie and Daffy Duck.

The ship's surreal arrival in the Catalan capital during tense times became a popular subject for discussion on social media and it became commonly known as "Tweety" in Spanish.

Tweety then became used as a symbol of Spanish police repression by the separatists, something which upset Warner Bros., the owners of the Looney Tunes characters, which said the images had been used without permission.

Weeks after docking, the friendly characters on the ship were covered up by giant tarps.

The ferry is owned by Italian company Moby as a tourist venture but it has a history dating back to 1981.

According to Catalan daily La Vanguardia, it originally took passengers from Helsinki to Stockholm and was one of the largest passenger ferries of its day.

In 1990 it was renamed Queen of Scandinavia and transported passengers from Norway to Sweden.

It was first used as a floating residence in 2009, housing 800 workers in a Swedish port and later was used as a temporary hotel during the Sochi Olympics.

From Barcelona on Thursday, Tweety left mostly empty, and the Interior Ministry has said extra police will remain in Catalonia.

"In Catalonia we have hotel offers that we didn't have before and there will be the possibility to redistribute police officials to hotels," Spanish Interior Minister Juan Ignacio Zoido said in a news conference on Tuesday.

Since the Oct. 1 referendum, tourism in Catalonia has seen a significant drop, which continues to worry the region's industry, according to various trade associations and government officials.

"There are many who hoped for this photo [of the ship's departure], but we know you aren't going far. Remember that workers will be everywhere to remind you that YOU ARE NOT WELCOME," tweeted a radical union of Barcelona dockworkers.

The situation in Catalonia remains tense, but the acute pressure has eased.

Since Tweety arrived, the Spanish government dissolved the separatist regional government, which voted to declare independence, and more than a dozen of its former leaders are now behind bars or exiled.

Snap elections will be held on Dec. 21.