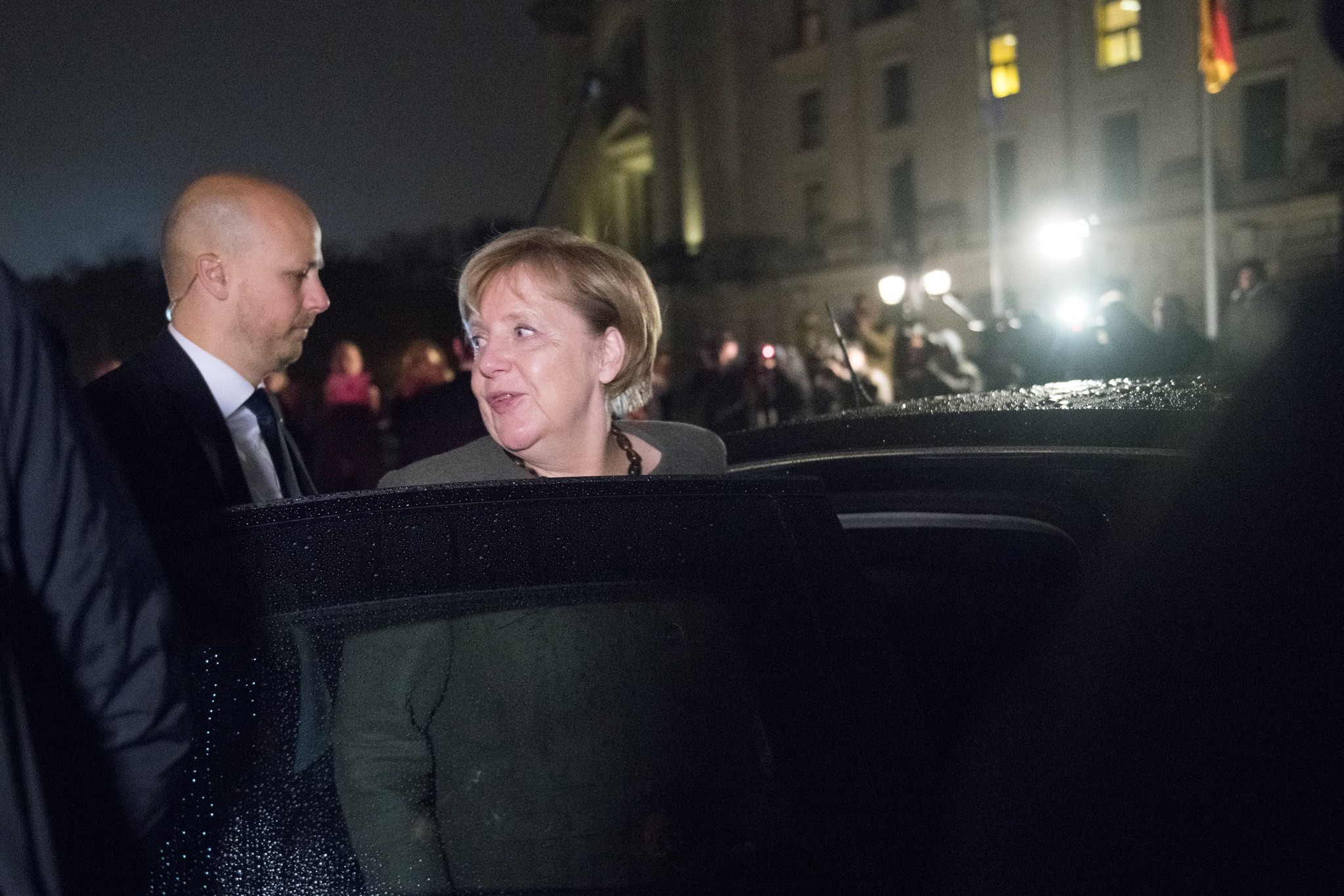 German Chancellor Angela Merkel (C) leaves in the early morning after a session of exploratory talks of four political parties in the German Parliamentary Society in Berlin, Germany, 17 November 2017. (EPA Photo)
by reuters
Nov 17, 2017 12:00 am

Chancellor Angela Merkel's efforts to forge a three-way ruling coalition could last all weekend after the parties missed Merkel's Thursday deadline and failed to reach agreement on key issues such as migration and finances.

Merkel's conservatives, the pro-business Free Democrats (FDP) and the environmentalist Greens told reporters around 4 a.m. that they were taking a break after 15 hours of frustrating negotiations and would resume their work around midday Friday.

"We still believe that it's worth it to work at it with our full energy," said Peter Tauber, secretary general of Merkel's Christian Democratic Union (CDU). "On the other hand, it's evident that it's difficult."

Wolfgang Kubicki, deputy leader of the FDP, told reporters he was "extremely frustrated" after four weeks of negotiations that have failed to produce agreement.

"If things stay like this, we won't get any further," Kubicki said. "It's frustrating when you sit together and then you realize that you're right back where you started."

Kubicki told ARD television the parties were "still so far apart on key issues such as migration, fighting climate change, finances and domestic security, that I can't imagine how we can get together in the short time available."

Michael Kellner, a top official with the Greens, said there was much to be done yet. "Nothing is agreed, nothing has been decided," he said.

Fellow Greens negotiator Juergen Trittin told broadcaster DLF the sides had moved closer on the issue of phasing out coal production, but the Bavarian conservative party refused to compromise on the issue of asylum seekers who wanted to bring their immediate families to Germany.

Merkel had wanted to wrap up exploratory talks on Thursday about the three-way coalition, which is untested at the national level, but the mood soured soon after the meetings began.

The parties broke off to huddle in their respective caucuses throughout the evening, with party officials trading barbs about who was to blame. Finally at around 4:30 a.m. the negotiators called it quits for the night.

FDP leader Christian Lindner said some progress had been made on digitalization, Europe and other issues, but the parties remained divided over migration and finances. Unlike Kubicki, he said he was optimistic a deal could still be hammered out.

Failure to reach agreement on a "Jamaica" coalition, so named because the parties' colors match those of the Caribbean island's flag, could lead to new elections.

That is a scenario none of the negotiating parties wants, given predictions that the far-right Alternative for Germany (AfD) could make further gains after surging into parliament in the Sept. 24 national vote.

A new election could also weigh heavily on the euro.

Merkel could still reach out to her previous coalition partners, the Social Democrats (SPD), but they have vowed to remain in opposition after suffering their worst election result since 1933 in the September elections.

The chancellor is under pressure from her own conservative bloc, particularly the Bavarian CSU sister party, to hold the line on key issues in the talks, especially on migration after the influx of over 1 million migrants over the past two years.

The CSU, worried about losing further ground in a 2018 state election, is pushing for migrant caps and more orderly immigration.

If negotiators agree to a deal, it must still pass muster with lower-ranking party officials. A key test would be a Greens conference on Nov. 25, when the party's rank and file would examine any coalition pact.