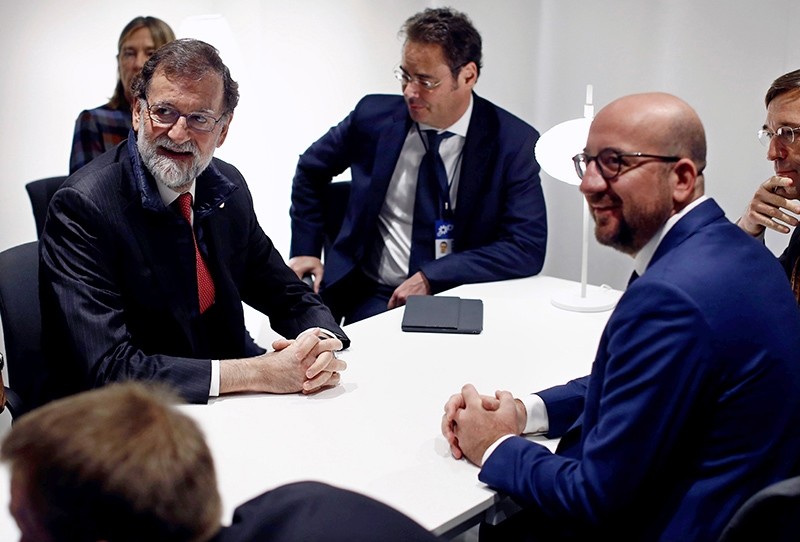 The court hearing for the five is the latest step in their flight from Spain to Brussels and refusal to return to face a rebellion investigation amid a push for Catalan independence.

The Belgian government has steadfastly said it can't intervene in Spain's extradition request since it's up to the independent judiciary to make a decision. Friday's court decision can still be appealed.

"It is a judicial case based on the separation of powers. It is up to the judicial authorities," Belgian Prime Minister Charles Michel said after meeting with his Spanish counterpart Mariano Rajoy on the sidelines of the European Union summit in Goteborg, Sweden.

Michel's spokesman, Barend Leyts, said the talks were "constructive" and didn't center on the Catalan issue itself. Instead the two leaders discussed Belgium's candidacy for an EU top police chief and the upcoming relocation of EU agencies from Britain, among other issues.

But the extradition issue continued to create unease.

Spain supplied the Belgian prosecutor with information detailing the jail conditions for Puigdemont and the four others should they be extradited.

Interior Minister Juan Ignacio Zoido said all the information requested had been sent but pointed out that "Spain is a state of law for many years," adding that "nobody in Europe is going to give us lessons."

The Interior Ministry confirmed Friday that it sent information regarding cell conditions, security guarantees, recreation, hygiene and food at the jails to which Puigdemont and four of his ex-cabinet ministers with him in Brussels would be sent to.

The ministry said the ousted Catalan government members, who are being sought for rebellion, sedition and embezzlement, would have access to their lawyers.

Even if the EU nations almost invariably have backed the position of Madrid in its standoff with Catalonia, Belgium was among the first to criticize the use of violence by Spanish police during the Oct. 1 referendum. Spain says the police response was proportionate.

The Flemish nationalist N-VA is the biggest partner in Michel's coalition government and has been in pointed exchanges with Rajoy's Popular Party about the Catalan issue and the links of both parties to an authoritarian past.