'Butcher of Bosnia' Mladic found guilty of genocide and war crimes, sentenced to life in prison 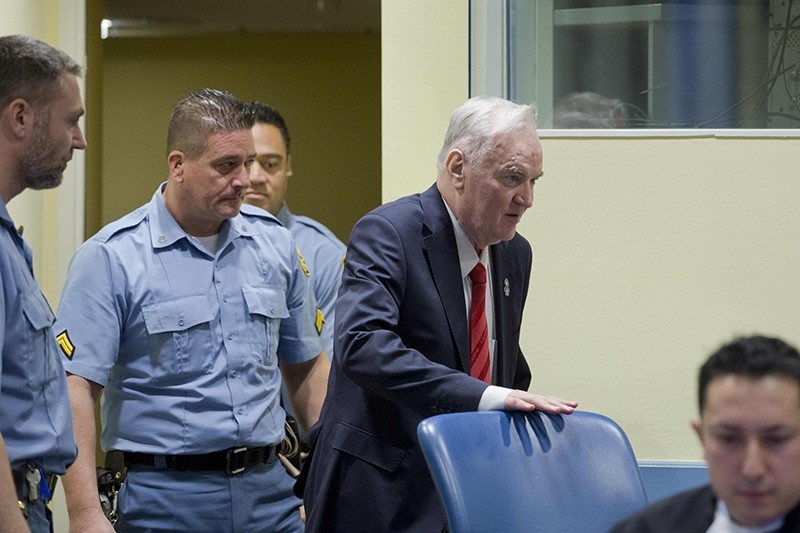 The former Bosnian Serbian commander, dubbed "The Butcher of Bosnia," was found guilty of 10 of 11 counts against him including genocide, murder, extermination, prosecution, forced deportation.

According to the International Criminal Tribunal for the former Yugoslavia (ICTY), Mladic "significantly contributed" to the 1995 Srebrenica genocide. He also ordered the bombing of Sarajevo and was "instrumental" in war crimes in the capital of Bosnia and Herzegovina, the court said.

The judges expelled Mladic from the courtroom after an outburst during the reading of the judgment. The defense asked that Mladic be excused or that the judges skip the explanation of the charges and go directly to the verdict, but the motion was dismissed. Mladic then jumped up and yelled something. The presiding judge Alphons Orie ordered him out of the courtroom and later continued the reading with Mladic watching from another room.

Mladic's trial was the last to come before the ICTY, and the judgment has been long awaited by tens of thousands of victims across the bitterly-divided region.

The man, who remains a hero to many in Serbia, has denied 11 counts including genocide, war crimes and crimes against humanity allegedly committed during the 1992-1995 war that killed 100,000 and displaced 2.2 million as ethnic rivalries tore Yugoslavia apart.

Now 74, Mladic was the highest military commander to be judged by the tribunal set up in 1993 and based in The Hague.

The verdict was due to start at 0900 GMT, but even before dawn international camera crews began setting outside the court with 250 journalists accredited to witness the landmark proceedings.

Wednesday's verdict "is one of the most important in the history of the tribunal", chief prosecutor Serge Brammertz told AFP.

Mladic "was the mastermind behind the killing of thousands of people," he said. In a twist of fate, former Serbian president Slobodan Milosevic died in 2006 while on trial.

Caught after 16 years on the run, Mladic faces two genocide charges including for the 1995 massacre in northeastern Srebrenica, where troops under his command slaughtered almost 8,000 Muslim men and boys.

The killings, in which the victims were marched away, shot in the back and dumped in mass graves, was one of the darkest episodes in the conflict, and has been called the worst atrocity on European soil since World War II.

Once a brutish military commander who strode around in combat fatigues, Mladic will also be judged for directing a 44-month campaign of sniping and shelling to terrorise citizens in Bosnia's capital Sarajevo, which left about 10,000 dead.

Mladic is further charged with taking hostage more than 200 NATO military personnel and keeping them as human shields to prevent NATO air strikes against the Bosnian Serb army.

Prosecutors have called for a life sentence, and Brammertz said that given Mladic's alleged "high level of responsibility" no other term "will be acceptable to us."

In a complex case spread over five years, almost 600 witnesses testified and more than 10,000 exhibits were presented.

But defence lawyers -- who in past days filed a flurry of requests to have their ailing client's health assessed -- have slammed his trial as "political" and said it failed to reconcile ethnic groups in Bosnia.

They insist he is "not a monster" and have called for his acquittal.

Having suffered at least three strokes, Mladic could die at any moment, his lawyers said. Rumours whirled on the eve of the verdict that he might not even show up in court.

His ill-health has left him with "part paralysis of the entire right side of his body," lawyer Dragan Ivetic added.

The stocky military leader, who saluted judges at his first appearance in 2011 shortly after his arrest in Serbia, has always denied the charges.

For victims of the atrocities committed by the Bosnian Serb army however, the time has come for Mladic to face justice.

Munira Subasic, president of the Mothers of Srebrenica, who said she had begged Mladic to spare her son, told AFP the truth had to be unveiled.

"We need truth, we need justice. Without justice there's no trust, without trust there's no reconciliation," she said.

In the northwestern Bosnian village of Zecovi, Fikret Bacic said he did not care whether Mladic is convicted or not.

"For me, Mladic is already dead anyway, the only thing that interests me is finding my wife, my children, my mother," he told AFP.

They remain among some 7,000 people still missing in Bosnia.