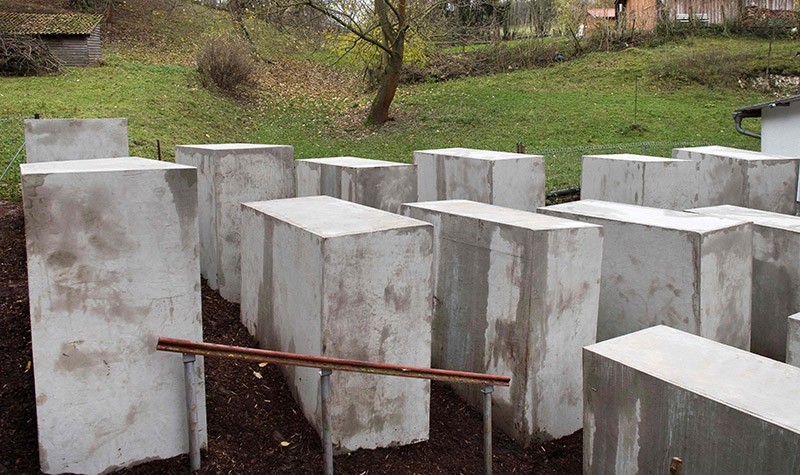 A replica of Berlin's Holocaust Memorial that was secretly erected overnight near the home of far-right AfD politician Bjoern Hoecke is pictured on November 22, 2017 in Bornhagen, eastern Germany. (AFP Photo)
by Nov 22, 2017 12:00 am

An artists' collective Wednesday built a replica of Berlin's Holocaust Memorial next to the east German home of a right-wing extremist politician who once derided it as a "monument of shame."

Bjoern Hocke, a senior member of the right-wing Alternative for Germany (AfD), scandalized the country in January when he attacked the monument commemorating the mass murder of Jews and said Germans should be more "positive" about their Nazi past.

"Germans are the only people in the world who plant a monument of shame in the heart of their capital," he told supporters in Dresden at the time.

In response, Berlin artists' collective Zentrum fuer Politische Schoenheit (Centre for Political Beauty, ZPS), on Wednesday erected a smaller version of the monument next to Hoecke's house in the Thuringian town of Bornhagen.

"We will not and cannot let his grotesque demands in relation to our political history go unchallenged," said Philipp Ruch, who led the project, adding that Hoecke should fall to his knees in front of the replica and pray for forgiveness for Germany's historic crimes.

"The lessons of the Holocaust will be invalidated through political indifference, resistance to refugees and cowardice. Germany must not only learn from the past, but also take action," he said.

Hoecke and his spokesman could not be reached for comment.