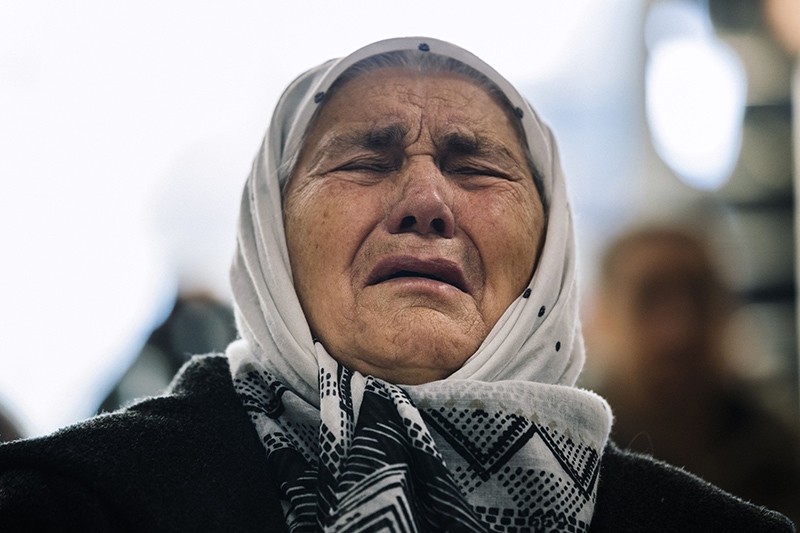 A victim's relative reacts as she watches a live TV broadcast of U.N. judges announcing the life sentence in the trial of former Bosnian Serbian commander Ratko Mladic, Potocari, Bosnia and Herzegovina, Nov. 22, 2017. (AFP Photo)
by Anadolu Agency Nov 22, 2017 12:00 am

There has been a general welcome for Wednesday's conviction of Ratko Mladic, known as the 'Butcher of Bosnia,' on charges of genocide and crimes against humanity.

Mladic, 74, was sentenced to life imprisonment by the International Criminal Tribunal for the former Yugoslavia (ICTY) in The Hague for his part in thousands of killings which took place during the 1992-1995 Bosnian War.

Mladic, a former Bosnian Serb army general, was also found to have had "significant responsibility" for the genocide of over 8,000 Muslim men and boys committed at Srebrenica in 1995.

He was found guilty of 10 of 11 counts against him including genocide, murder, extermination, prosecution, forced deportation.

However, for many, Mladic's crimes are so extensive that no sentence could possibly atone for the thousands killed and injured by his forces.

Hatidza Mehmedovic, president of the Mothers of Srebrenica Association said: "We must accept the facts and build a better future. The genocide in Bosnia and Herzegovina should no longer be denied," adding, however, that the decision was "a drop in the ocean."

Fikret Grabovica, the president of an association of parents whose children were killed during the siege of Sarajevo said that they had been granted "partial justice."

"There is no penalty for what Mladic has done and what he is responsible for. It was important that he got life imprisonment. We are partly satisfied with the decision, if not completely," said Grabovica.

The president of the Mothers of the Srebrenica and Zepa enclaves, Munira Subasic, told Anadolu Agency in The Hague that life imprisonment would never be enough.

"This is the same verdict that was given also to [Bosnian Serb leader Radovan] Karadzic... The only difference is that Mladic had ties to the Serbian army. We victims now have the right to indict Serbia and the Republika Srpska," said Subasic.

However, the Serb member of the Presidency of Bosnia and Herzegovina, Mladen Ivanic, said the court had not shared justice among Serbs, Croats and Bosniaks.

"The Hague Tribunal has brought distrust instead of trust, and instead of reconciliation, it will lead to new political conflicts. The verdict of General Mladic shows that they continue with a negative attitude towards the Serbs and that the Hague Tribunal will remain remembered for not sharing justice but politics," Ivanic said.

Chief Prosecutor of the International Criminal Tribunal for the former Yugoslavia (ICTY) Serge Brammertz, insisted however, that the verdict reflected on Mladic's actions, not those of the Serbian people.

"Some may think that this decision is a decision against the entire Serbian people, but my office absolutely refuses to accept it, and that decision is only for the crimes committed by Mladic," he said.

Turkish Foreign Ministry stressed importance of the ICTY's judgment, saying it proved that special courts do not allow impunity for any crime committed against humanity.

"We hope that the judgment will serve to social peace and reconciliation in Bosnia Herzegovina, and will set an example to avoid commitment of similar crimes in the ongoing conflicts in different parts of the world," the MFA said in a statement.

"Two of the main architects of some of the worst atrocities in Bosnia and Herzegovina, including the genocide of Bosnian Muslims in Srebrenica, Ratko Mladic and Radovan Karadzic, have now been convicted and are facing lengthy jail sentences. Mladic is the epitome of evil, and the prosecution of Mladic is the epitome of what international justice is all about," he said in a statement.

"All those who are committing serious international crimes in so many situations today across the world should fear this result," Hussein said.

NATO Secretary General Jens Stoltenberg also welcomed the U.N. court's decision and said he hoped that the ruling will move the region further down the path of peace and reconciliation.

Serbian President Aleksandar Vucic claimed everyone knew what the outcome of Ratko Mladic's trial would be. Vucic also called on his people to look forward in peace.

"I urge the citizens of Serbia to start looking into the future, to think that we will preserve the peace and stability of the region, that we do not get stuck in the tears of the past, but based on workers' sweat we create a better future for all of us," he said.

German foreign ministry deputy spokeswoman Maria Adebahr told a news conference in Berlin the conviction was an "important contribution to coming to terms with the hideous crimes committed in the former Yugoslavia in the 1990s".

"Our sympathies are with those who survived and those who lost their loved ones."