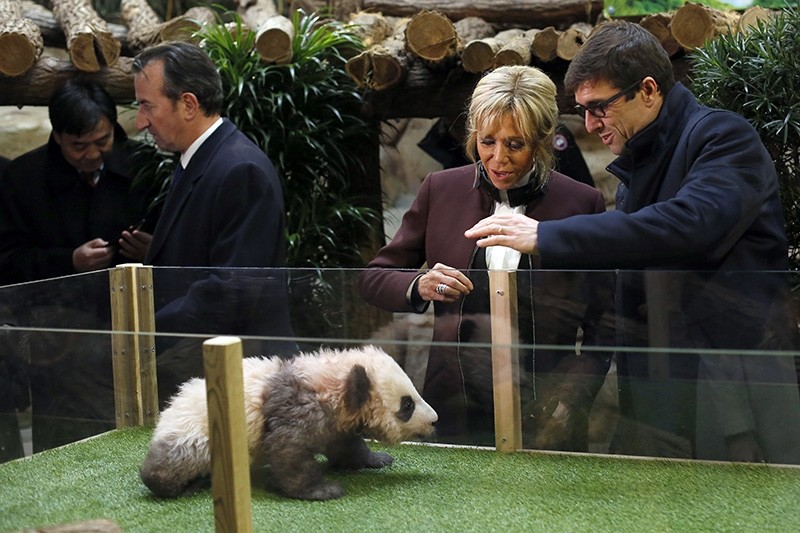 French First lady Brigitte Macron attends a naming ceremony of the panda born at the Beauval Zoo, with Rodolphe Delord, director of the zoo, in Saint-Aignan-sur-Cher, France, Monday, Dec. 4, 2017. (AP Photo)
by Compiled from Wire Services Dec 04, 2017 12:00 am

Macron pulled aside a red veil on a sign to reveal the name Yuan Meng, which means "dream come true."

Monday's naming ceremony at the Beauval Zoo south of Paris was an important diplomatic moment, involving Chinese officials who flew in from Beijing for the event. The cub's parents are on loan to Beauval from China, and the cub will be sent to a Chinese panda reserve when it is weaned. 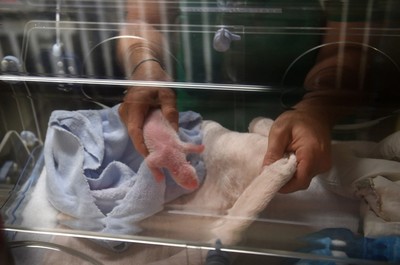 Yuan Meng was born to mother Yuan Yuan on August 4, along with a twin which died shortly after birth.

The cub now weighs 7.9 kilograms, compared to just 142.4 grams at birth, according to the zoo.

The pandas have been in France since 2012 as part of a research and breeding program in cooperation with the Chengdu panda center in China.

China, which retains ownership of all giant pandas loaned to zoos abroad, sent two specialist panda caretakers to look after the new arrival.

There are only about 1,800 pandas in the wild in China and about 400 in captivity worldwide.