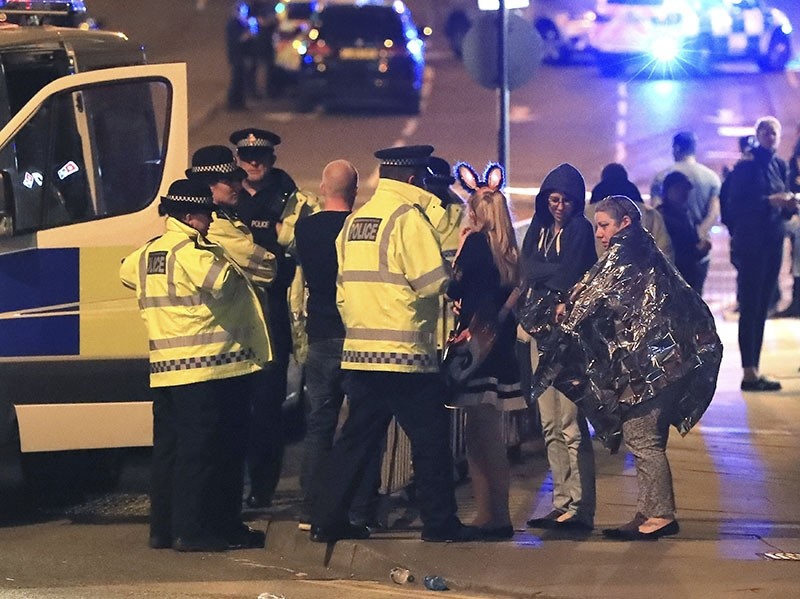 This is a May 23, 2017 file photo of members of the emergency services attending the scene at Manchester Arena after reports of an explosion at the venue during an Ariana Grande gig. (Peter Byrne/PA, File via AP)
by Anadolu Agency Dec 05, 2017 12:00 am

The terror attack in Manchester earlier this year could have been avoided if intelligence on the bomber had been treated differently, an official report said Tuesday.

Salman Abedi, the suicide bomber who killed 22 people at a music concert on May 22, had been a "subject of interest" for the security service MI5, a report by lawyer David Anderson said.

Anderson, a former reviewer of counter-terror legislation, issued the report into four terror attacks that killed 36 people in Manchester and London in 2017.

He said it was conceivable the attack by Abedi could have been avoided "had the cards fallen differently". Three of the six terrorists involved in the attacks on Manchester Arena, Westminster Bridge, London Bridge and Finsbury Park had been known to security services.

Reviews by MI5 and counter-terrorism police earlier said Abedi was investigated by the MI5 between January and July 2014 and again in October 2015.

However, the inquiries were downgraded and the significance of intelligence received about the 22-year-old before the Manchester bombing was not treated as a priority.

"On two occasions in the months before Abedi killed 22 people, MI5 received intelligence, but its significance was not fully appreciated at the time and, in hindsight, was 'highly relevant' to the planned attack," the report said.

Abedi was not questioned when he returned to the U.K. from Libya four days before the attack.

Anderson said the decisions made by counter-terrorism officers were mostly justifiable although incorrect in hindsight.

MI5 had scheduled a meeting to discuss whether Abedi should be further investigated for May 31 -- nine days after the bombing.

Anderson, who was asked by the government to assess the police and security services' internal reviews into the attacks, said 22 terrorist plots had been stopped over the past four years, including nine in the past year.

The report added: "In particular, MI5 and the police have identified the need to use data more effectively, to share knowledge more widely, to improve their own collaboration and to assess and investigate terrorist threats on a uniform basis, whatever the ideology that inspires them."

As well as Abedi, two terrorists involved in the Westminster and London Bridge attacks were known to the police and intelligence services.

Khalid Masood, who killed five people at Westminster in March, was previously investigated for extremist links and criminal activity but his file was closed five years before the attack.

Khuram Butt, who led June's London Bridge attack, was being actively investigated on suspicion of planning an attack at the time he and two others killed eight people at London Bridge and nearby Borough Market.