Russia must pull forces out of Ukraine to recover ties with West, US says 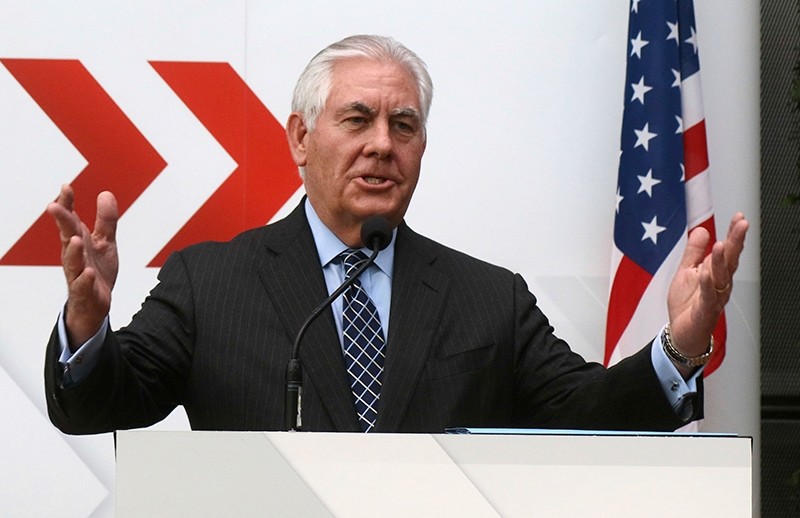 U.S. Secretary of State Rex Tillerson speaks during the 24th Ministerial Council of the Organisation for Security and Co-Operation in Europe (OSCE) at the Hofburg palace in Vienna, Austria, Dec. 7, 2017. (AFP Photo)
by Associated Press Dec 07, 2017 12:00 am

U.S. Secretary of State Rex Tillerson said Thursday that Ukraine was the sole sticking point keeping the United States and Russia from forging a closer relationship, suggesting that all other disputes were secondary.

"The issue that stands in the way is Ukraine," Tillerson said.

President Donald Trump campaigned on the need to improve ties with Russia, Tillerson said, adding that "normalizing" relations between the nuclear powers was something the U.S. still "badly would like to do." He said that from the start, the Trump administration had told Moscow that addressing Ukraine was essential to warmer ties.

The assessment from America's top diplomat notably played down other areas of dispute, particularly Russia's meddling in the 2016 presidential election. U.S. intelligence agencies, including the CIA and FBI, have concluded the Kremlin interfered in the election in an effort to help Trump and hurt Democrat Hillary Clinton.

Trump has repeatedly cast doubt on that finding, and a special counsel is investigating whether members of the Trump campaign colluded with the Russian effort. He has said he believes Russian President Vladimir Putin's personal denials that the Moscow meddled.

But Tillerson hasn't shied away from accusing the Kremlin of election interference. One of the Trump team's toughest voices on Russia, he said in a speech last week there was "clear evidence of Russia meddling in democratic elections in the U.S. and Europe" and he called it part an "active threat of a recently resurgent Russia."

Tillerson's focus on Ukraine came as he met with European diplomats at the Organization for Security and Cooperation in Europe, established during the Cold War to serve as a bridge between East and West. Tillerson insisted the U.S. could never overlook accept Russia's "attempted annexation" of Crimea or Moscow's military intrusion in eastern Ukraine.

"We should be clear about the source of this violence," Tillerson said. "Russia is arming, leading, training, and fighting alongside anti-government forces."

The sharp rebuke of Russia came just before Tillerson met with Russian Foreign Minister Sergey Lavrov. Seated around a large table with their aides, the two said nothing of substance when reporters were allowed in for a few seconds to witness the start of their meeting.

Earlier, in remarks at the OSCE conference, Lavrov acknowledged no fault in his country's actions. He said Ukraine was dragging its heels regarding proposals for U.N. peacekeepers, as well as obstructing several international channels set up to try to reduce violence and move toward a resolution to the conflict.

"The whole responsibility for it lies with the Ukrainian authorities," Lavrov said.

Though he didn't bring up election concerns Thursday, Tillerson did briefly mention long-standing U.S. tensions with Russia over Syria. The Kremlin has propped up the Assad regime while the U.S. has aligned itself with opposition groups seeking his ouster.

Washington and Moscow have worked to ensure their militaries, both active in Syria in recent years, don't accidentally end up in confrontation. Yet there are growing U.S. concerns that Russia's significant influence in Syria will make it harder to resolve the war there and to limit Iranian influence in the country now that the Daesh terrorist group in Syria is near defeat.