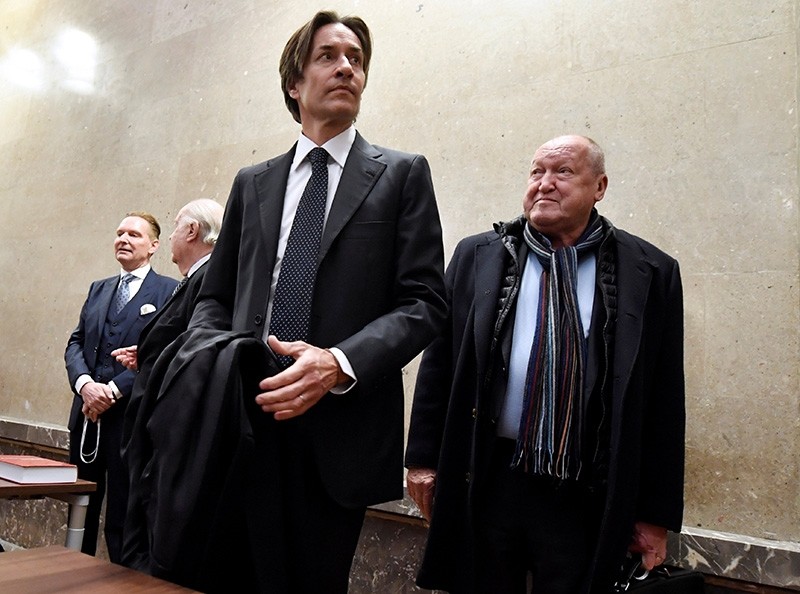 Former Austrian Finance Minister Karl-Heinz Grasser and Ernst Karl Plech arrive in the courtroom on the first day of his trial for embezzlement in Vienna, Austria, December 12, 2017. (Reuters Photo)
by Compiled from Wire Services Dec 12, 2017 12:00 am

The trial at Vienna's Regional Criminal Court marks the first time that an Austrian minister stands accused of having committed corruption during his tenure, according to the Justice Ministry.

Karl-Heinz Grasser and 15 former high-ranking politicians, managers and bankers are charged in connection with the privatisation of state housing company Buwog in 2004.

Grasser, 48, was one of Austria's most popular politicians and became the country's youngest finance minister in 2000 when he was appointed aged 31 to serve in a coalition between the conservatives and the far right Freedom Party.

He is accused of embezzling part of a commission for the sale of 60,000 federal apartments. He denies the accusations and said in a television interview on Monday he was glad the trial was starting so he could prove his innocence.

Defense lawyers say the case is politically motivated at a time when conservatives and the far-right are working to form a government to replace a coalition led by social democrats.

Investigators spent eight years gathering evidence and working on an indictment that runs for more than 800 pages.

It says he under-priced the biggest ever sale of state-owned flats. The tender came down to two bidders and the contract was awarded to a financial consortium that offered just 1 million euros ($1.2 million) more than its competitor.

According to the prosecution, Grasser tipped off the winning bidder about which bidding price would beat rival investors.

In return for this favor, the defendants allegedly received kickbacks worth 10 per cent of the sales prices of 961 million euros.

Grasser and the accused lobbyists, construction company managers and real estate executives face up to 10 years in prison each.

Grasser, who is married to socialite Fiona Swarovski, the heir of the Swarovski crystal manufacturers, says he is a victim of prejudice from the media and the judiciary.

The trial is the latest to stem from the tenure of Chancellor Wolfgang Schuessel who took power in 2000. Others have concerned the telecoms and real estate sectors.

The court rejected a petition by Grasser's defence lawyer Manfred Ainedter to remove the chief of the four judges, Marion Hohenecker, due to conflict of interest because of tweets critical of Grasser sent by her husband who is also a judge.