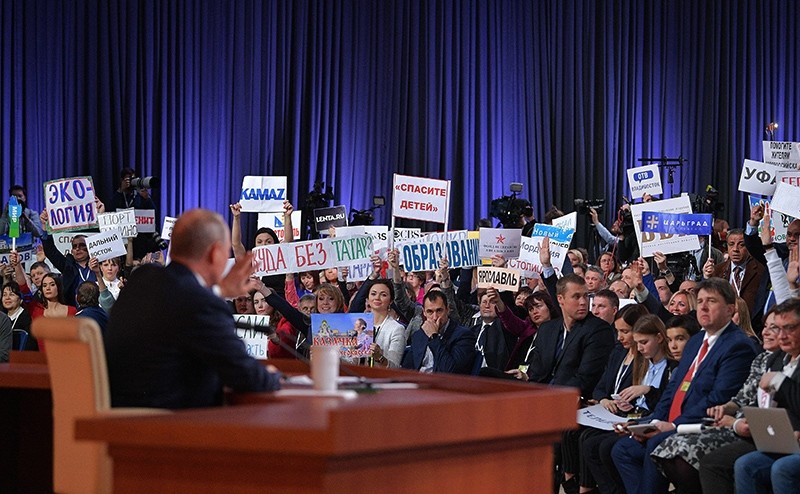 When asked about his relationship with U.S. President Donald Trump, Putin said he was on first name terms with him.

"I'm on good terms with Trump. I think I'd use what you'd refer to as the informal way of greeting him," Putin said, adding that it was important that world leaders establish effective working relations with each other.

Putin also said allegations of collusion between U.S. President Donald Trump and Russia have been "invented" by his political foes to undermine his legitimacy, adding that the reports have undermined the U.S. political system. He reaffirmed his firm denial of meddling in the 2016 U.S. presidential election.

"All of it was invented by people who oppose President Trump to undermine his legitimacy," he said. "I'm puzzled by that. People who do it are inflicting damage to the domestic political situation, incapacitating the president and showing a lack of respect for voters who cast their ballots for him."

Putin, who is running for re-election in March, was answering a question about opposition leader Alexei Navalny who looks unlikely to be allowed to contest the election due to what Navalny says is a trumped up criminal case. The question was put to him to Ksenia Sobchak, a television personality who has said she plans to run against Putin in the same election, which polls suggest Putin will comfortably win.

Putin, in response, accused Sobchak, who has said she wants to attract voters who are "against all candidates," of not offering any positive solutions to the problems facing Russia.

He likened Navalny to former Georgian president Mikheil Saakashvili who came to power in his own country in 2004 after a peaceful revolution and is now heavily involved in politics in Ukraine, where he is calling for the impeachment of Ukrainian President Petro Poroshenko.

"Do you want tens of people like Saakashvili to be running around public squares?" Putin asked Sobchak, when asked about Navalny not being allowed to take part in the election.

"Those who you've named (Navalny) are the same as Saakashvili, only the Russian version. And you want these Saakashvilis to destabilise the situation in the country? Do you want attempted coups d'etat? We've lived through all that. Do you really want to go back to all that? I am sure that the overwhelming majority of Russian citizens do not want this."

Putin also insisted that there is no Russian army presence in eastern Ukraine.

According to the Russian president, the local militia groups in eastern Ukraine are sufficient for handling military threats.

He added that the U.S. was a full-fledged participant in the Ukraine peace process.

"The U.S. has been very deeply involved and is in the know about all the events happening," Putin said.

Putin stressed that he is not opposed to the US joining the peace talks that have been conducted under the so-called Normandy format comprising Ukraine, Russia, Germany and France.

Addressing the issue of Russia's Winter Olympics ban, Putin accused U.S. agencies of manipulating evidence from the main whistleblower on doping at the 2014 Sochi Olympics.

Putin said that former Moscow anti-doping laboratory director Grigory Rodchenkov — who is under witness protection after fleeing to the United States last year — is "under the control" of the American agencies, including the FBI.

Rodchenkov being in the United States "is not a positive for us, it's a negative. It means he's under the control of American special services," Putin said. "What are they doing with him there? Are they giving him some kind of substances so that he says what's required?"

Putin added that Rodchenkov should never have been appointed to run Moscow's anti-doping laboratory in the first place.

"It was a mistake on the part of those who did it, and I know who did it," he said, but didn't name names or say they should be punished.