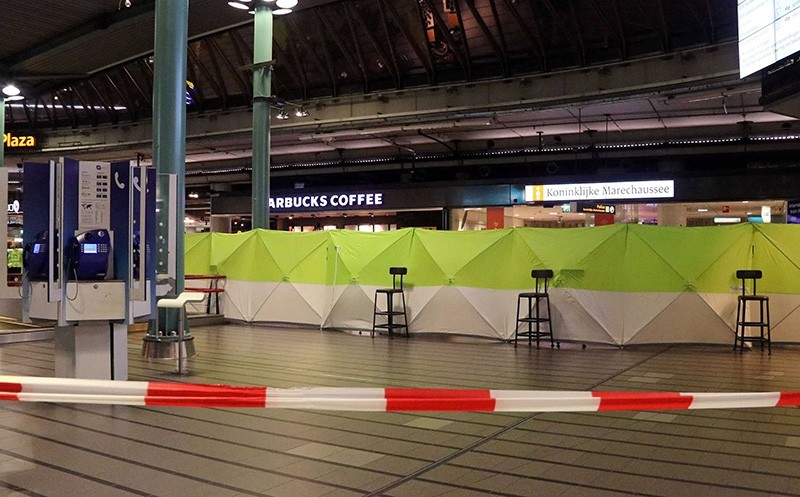 A view inside Schiphol Airport after a man wielding a knife was shot by military police, Amsterdam, Netherlands, 15 December 2017. (EPA Photo)
by Compiled from Wire Services Dec 15, 2017 12:00 am

Dutch police said they shot a man wielding a knife at Amsterdam's Schiphol Airport on Friday, prompting authorities to clear the building.

In a tweet, the Marechaussee police service also said the "situation is safe" and the suspect has been detained and removed from the scene.

No further information was immediately available.

The airport's crowded, cavernous entrance plaza, where trains arrive underground and from where people make their way past shops and eateries to the arrivals and departures halls, was briefly evacuated, Tom Goemans, a spokesman for Schiphol, told AFP.

But the airport tweeted later that the plaza was "reopened to the public again. A small part is still closed down," it said.

Schiphol airport is one of Europe's top five busiest air hubs, handling a record 63.6 million passengers in 2016, up from 58 million in 2015.

Opened in 1916 as a military airport, Schiphol became the country's primary airport in 1949, lying just about nine kilometers (five miles) southwest of the Dutch capital, Amsterdam.

It serves as the second main hub for Air France-KLM, and also hosts many budget airlines such as Transavia and EasyJet.

The Netherlands has so far been spared from the slew of terror attacks which have rocked its closest European neighbors in past years.

But amid a number of scares in recent months, and reports that people linked to some of the attacks may have crossed briefly into the country, concerned top Dutch security and intelligence officials have been keeping a wary eye on events.