EU leaders have agreed to move to second phase of Brexit talks with London: Tusk 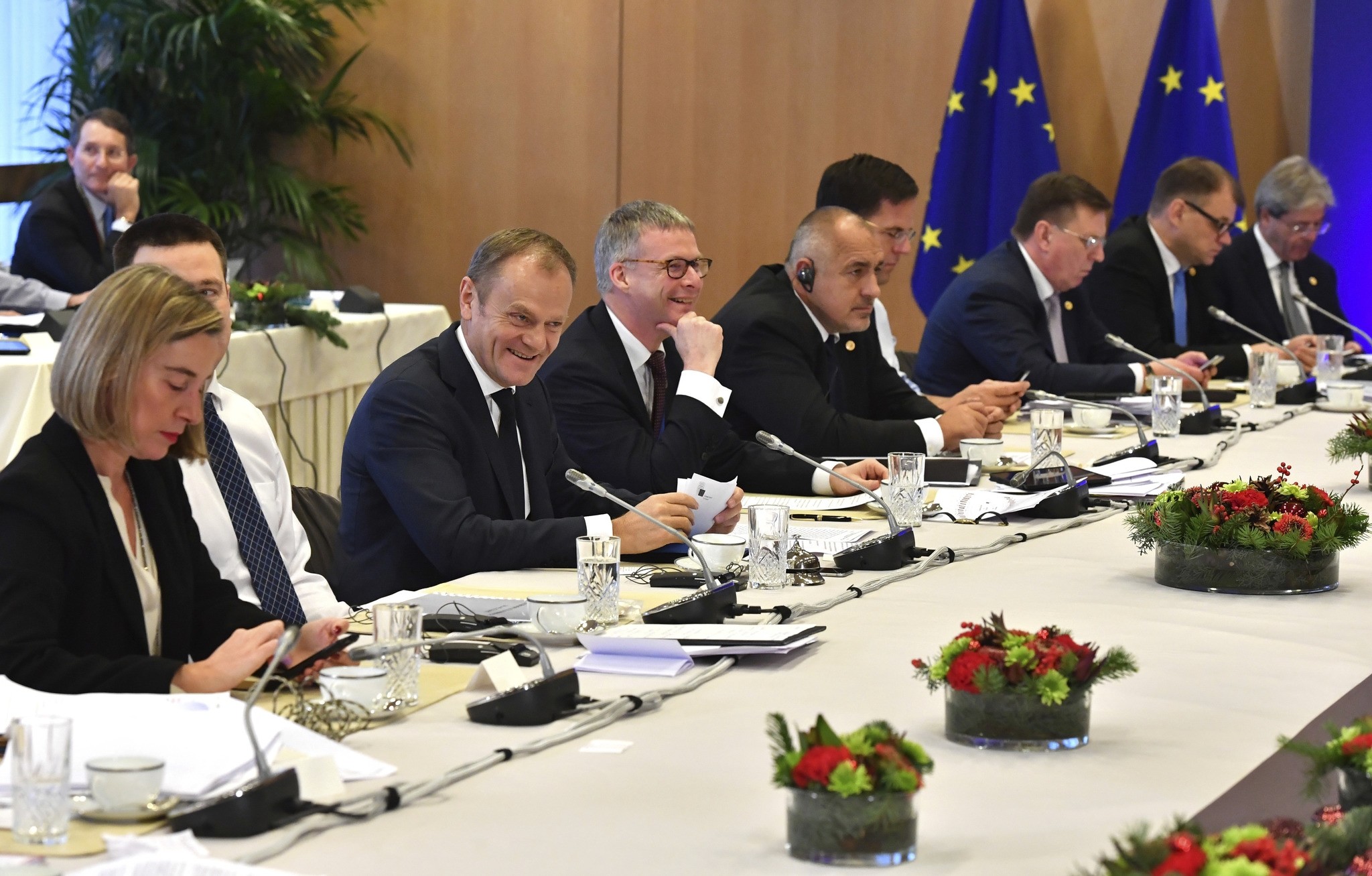 European Council President Donald Tusk, third left, participates in a round table meeting regarding Article 50 at an EU summit in Brussels on Friday, Dec. 15, 2017. (AP Photo)
by Compiled from Wire Services
Dec 15, 2017 12:00 am

European Union leaders have given the go-ahead to Brexit talks with Britain to move onto the next stage, which will involve discussions over future relations and trade.

In a tweet on the second day of an EU summit, EU chief Donald Tusk said EU leaders "agree to move on to the second phase" in Brexit talks and congratulated British Prime Minister Theresa May.

The clearance provides a welcome boost to May, who earlier this week lost a key parliamentary vote over giving lawmakers the final say on the Brexit deal before Britain leaves the EU in March 2019.

But although discussions will begin in January on a post-Brexit transition period of around two years, they stressed that actual talks on future trade ties would not start until March as they need more clarity on what Britain wants after it leaves the bloc.

As he arrived for the meeting on Friday, European Commission President Jean-Claude Juncker -- who sealed the deal with May on December 8 after tense all-night talks -- said the British premier had made "big efforts".

In a breakthrough last week, the two sides agreed that the first round of issues in the Brexit talks had advanced sufficiently for now. These involved Britain's divorce payment, keeping the border between Ireland and Northern Ireland open and sorting out citizens' rights following Brexit.

Britain voted to leave the EU in a referendum in June 2016 and is due to end its four decade membership on March 29, 2019.

After months of difficult talks, May and Juncker agreed a deal on the key divorce issues of Britain's exit bill, the future of the Irish border and expatriate rights.

At a meeting without the British premier on Friday, the other EU leaders formally agreed there had been "sufficient progress" in the first phase and that the second phase could begin.

May had on Thursday night addressed her counterparts over dinner and was "clear about wanting to move onto trade talks as quickly as possible" with "ambition and creativity", a British official said.

Leaders said there had been polite applause for May, who came to the summit hours after a humiliating parliamentary defeat over her Brexit plans.

As she left on Thursday evening, May said "we've had very good discussions. I'm looking forward to the discussions coming out of tomorrow (Friday) on the future trade relationship and security relationship".

After the dinner, German Chancellor Merkel said May had made "good offers" but added that "there remain many issues to be solved and we don't have much time".

Hungarian Prime Minister Viktor Orban said May was "a tough leader in the interest of Britain."

Dutch Prime Minister Mark Rutte said she was a "formidable political operator" but that it was "crucial" she sets out Britain's wish list for long-term ties.

The EU has warned it could take years after Britain leaves to formally sign a trade deal, rejecting claims by British Brexit minister David Davis that it could happen immediately afterwards.

British officials are hoping for a deal by March on a two-year transition out of the bloc, during which their relationship would largely stay the same.

A trade deal will be a tougher period, with options including following the model of a recent EU-Canada trade deal, or Norway's membership of the European Economic Area.

But questions still linger over the divorce agreement, after Davis appeared to suggest it was not legally enforceable and that Britain would only pay its exit bill if it got a trade deal.

There are particular concerns about the guarantee made by London -- at Dublin's request -- that there will be no frontier checks between Ireland and the British province of Northern Ireland.

EU Brexit negotiator Michel Barnier has said there will be a "separate track" in the second phase of negotiations that remains dedicated to the Irish question.

"Even a primary school student will realize there is a problem to solve with the Irish border," said Austria's Chancellor Christian Kern.