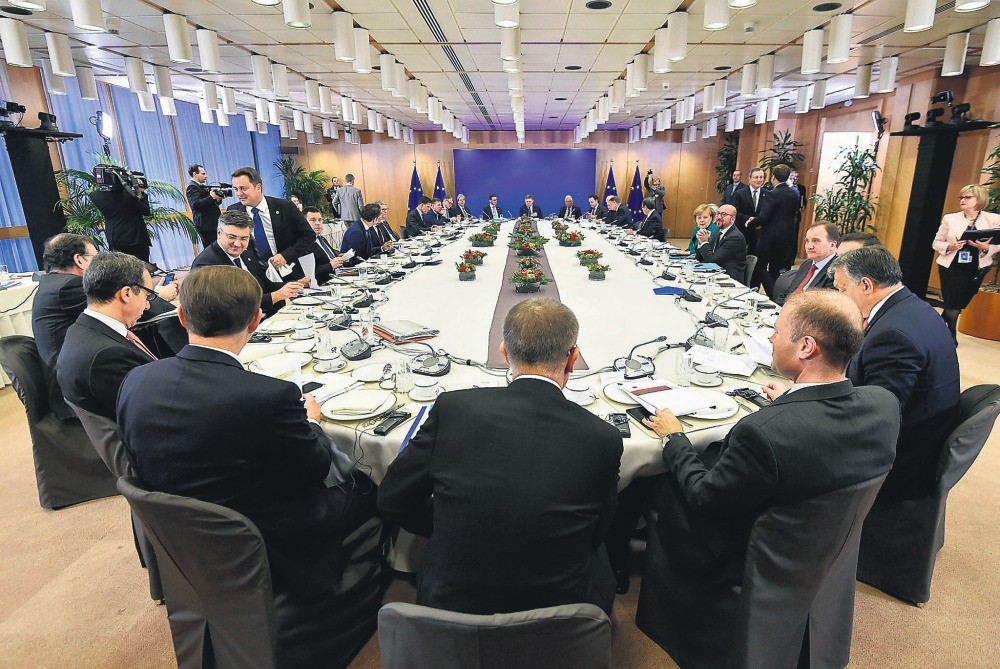 European Union heads of state attend a breakfast meeting at an EU summit in Brussels, Friday, Dec. 15.
by Compiled from Wire Services Dec 16, 2017 12:00 am

British Prime Minister Theresa May's 27 European Union counterparts are set to agree there has been sufficient progress on negotiating key separation issues, including Britain's exit bill and the Irish border, to move talks to Britain's future relationship with the bloc.

The EU, however, will stress that while they will start discussing a post-Brexit transition in January, they will not begin trade talks until March as they need more clarity on Britain's goals for life after it leaves in 2019.

After May addressed the leaders over dinner on Thursday in Brussels, they gave a round of applause, adding that Britain had to quickly spell out what it wanted.

German Chancellor Merkel said May had made "good offers that imply that the 27 will see sufficient progress," but added that "there remain many issues to be solved, and we don't have much time."

May sealed the divorce deal with European Commission President Jean-Claude Juncker on Dec. 8 after all-night talks that ended months of tortuous negotiations.

It covers Britain's financial settlement, the future of the Irish border and expatriate rights, and the next stage will cover trade and a transition period to ease the break.

"My trust in May is intact," Juncker said as he arrived for the second days of talks.

But Juncker warned that the next phase of talks to work out future ties with Britain "would be much harder than the first phase, and the first phase was very hard."

Over dinner, May was "clear about wanting to move onto trade talks as quickly as possible," a British official said.

May told them she "makes no secret of wanting to move onto the next phase and to approach it with ambition and creativity," adding that the transition period was a "particular priority."

British officials are hoping for a new trade deal by March on a two-year transition out of the bloc, during which their relationship would largely stay the same.

A trade deal will be a tougher period, with options including following the model of a recent EU-Canada trade deal or Norway's membership in the European Economic Area.

While progress was made on Brexit, immigration remains an issue of significant discord between the eastern and the western European Union member countries.

EU leaders failed early Friday to narrow the east-west gap over how to deal with the unprecedented number of immigrants coming to Europe and face a big task ahead to reform asylum rules by the deadline of June next year, summit participants said.

During more than two hours of what one called a fierce debate, Eastern European leaders stood firm against refugee quotas that the majority adopted in 2015 as a form of solidarity with frontline states Greece and Italy.

The stubborn divide contrasts with broad agreement among the leaders to continue shoring up Europe's external borders through cooperation deals with third countries like Turkey and Libya.

European Council President Donald Tusk irked some nations when he said in a pre-summit letter that a mandatory quota scheme for relocating refugees from frontline states was "ineffective" and "highly divisive."

Eastern European states Poland, Hungary, Slovakia and the Czech Republic have backed his approach, but Germany and others say quotas are a necessary way of showing solidarity in the EU.

Merkel's 2015 decision to open the door to millions was blamed by a number of European leaders, particularly Hungary's Prime Minister Viktor Orban, for worsening the immigration crisis.

Quotas triggered sharp east-west division when they were adopted at the height of the migrant crisis in 2015 as a way to ease the burden on Italy and Greece, which have had more than 1.5 million people land on their shores in the last three years.

The EU has since stalled on plans for a permanent mechanism for future crises, and the leaders of Poland, Hungary, the Czech Republic and Slovakia made clear their continuing opposition.

Before the summit started, the four eastern leaders offered a financial contribution of 35 million euros to bolster external borders.

Italy and Greece have seen sharp declines in immigrant arrivals in the last months and year as a result of EU cooperation with Libya and Turkey, but fear future crises.