France takes in first group of screened refugees from Africa 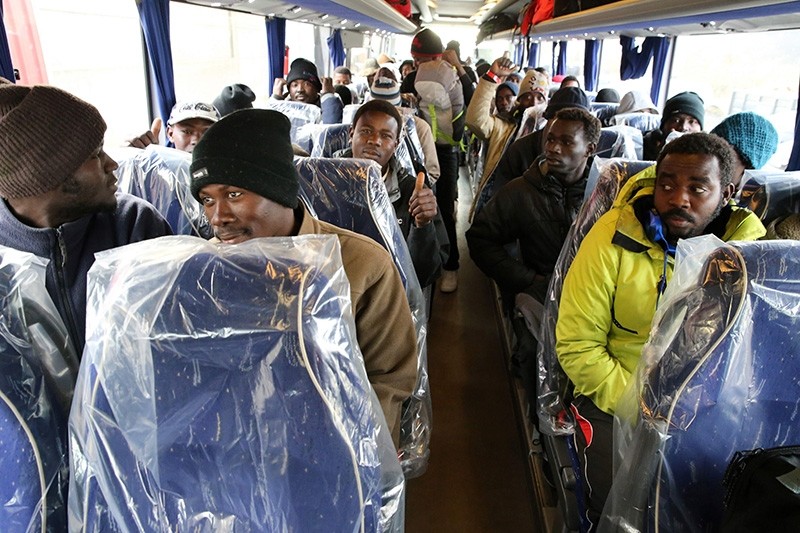 Migrants sit on a bus with plastic covered seats before leaving to reception centres across France, at the ,Jungle, migrant camp in Calais, northern France, on October 26, 2016, during the full evacuation of the camp. (AFP Photo)
by Dec 18, 2017 12:00 am

France on Monday accepted a first group of 19 refugees who were identified in Africa under an overhauled asylum policy that will also see it expel thousands of economic migrants.

While it has drawn little public outcry in France, the policy faces stiff opposition from the left and from charities that shelter migrants, 22 of which called in an open letter for France's rights ombudsman Jacques Toubon to intervene.

Djamel, a refugee from the Central African Republic, arrived at Paris's Charles de Gaulle airport with his wife and four children after spending four years at a camp in Chad, telling AFP: "Now we've no other family. Now you are our family."

The new refugees -- also hailing from Sudan -- were brought to France from the camp in the Chadian capital N'Djamena where Djamel said around 1,000 people were sheltering.

The program, which expects to identify 3,000 African refugees by 2019, aims to prevent people from risking their lives at sea.

More than 3,000 have died attempting to cross the Mediterranean in rickety boats since Europe's migrant crisis started in 2015, according to the International Organization for Migration.

French President Emmanuel Macron said last month that while he was "deeply committed" to France's "tradition of welcome", his government would be "inflexible" in its policy of expelling those who do not qualify for asylum.

The president acknowledged that the operation would take "several years" and was at the mercy of "geo-political shifts" in the Middle East and migration caused by crises linked to global warming.

His so-called "migration hotspots" in Chad and Niger process the asylum applications of people already recognized as refugees by the UN refugee agency UNHCR.

Both are former French colonies in the semi-desert Sahel region of Africa.

The French government has launched a parallel program in France to distinguish between asylum seekers and those simply looking for a better life in Europe.

The centrist Macron -- whose staunchly anti-immigration rival for the presidency, far-right leader Marine Le Pen, won one-third of the vote in May -- has touted a tough policy towards economic migrants.

Florent Gueguen, head of an umbrella grouping of charities that help people in distress, said the policy was "exactly what we don't want: to be required to give information about people that could be used against them."

He noted that most of those sheltering in centers in France came through another European country, which has the legal responsibility to determine their asylum status under the so-called Dublin Regulation.

"If the centers become traps for migrants, some charities will shut down their operations, and the migrants themselves won't go to them anymore," Gueguen said.

Rights ombudsman Toubon, speaking on French television channel France Inter, said the program could incite unrest at the shelters, pitting those with a realistic chance of asylum against economic migrants.

"We have a difficult situation," Toubon said, predicting that the migrants would refuse to be divided. "There will be a triage... with all the risks of conflict."

The number of those expelled from France rose by 14 percent in the first 11 months of the year, Interior Minister Gerard Collomb said Monday.

On Monday editorialist Alexandra Schwartzbrod lamented that "the birthplace of human rights no longer thinks of anything but closing its borders and mass expulsion."

Writing in left-leaning daily Liberation on Monday, she said the September elections in Germany showed "the price politicians pay for opening their doors wide to the misery of the world."

The elections left long-serving Chancellor Angela Merkel without a majority and struggling to forge a coalition as the far right surged on anger over her migrant and refugee policy.

"France is a generous country, but it cannot take on all of the world's misery," Macron said last month.

He was echoing the words of his Socialist mentor Michel Rocard, who was prime minister from 1988 to 1991, and the first left-wing leader to openly suggest curbs on immigration.