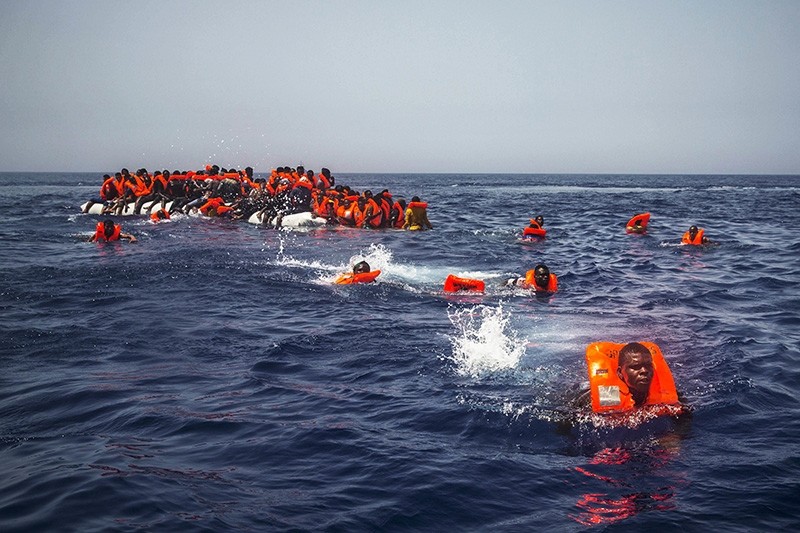 African migrants try to reach a rescue boat from the Spanish aid organization Proactiva Open Arms, after falling from a punctured rubber boat in the Mediterranean Sea, about 12 miles north of Sabratha, Libya, on July 23, 2017. (AP Photo)
by Dec 18, 2017 12:00 am

An organization that helps relatives trace loved ones who have gone missing in conflicts and disasters is launching an ambitious project to identify the thousands of migrants lost while trying to reach Europe.

Thanks to a donation of $400,000 (340,000 euros) from Switzerland announced Monday, the International Commission on Missing Persons (ICMP) will work over the next two years to set up a program to locate and identify people who have died during perilous journeys across the Mediterranean.

In October the organization, which was born out of conflicts in the former Yugoslavia, completed its move to The Hague from Sarajevo, unveiling state-of-the-art laboratories which will help trace missing people through sophisticated new DNA tests, as the non-governmental body broadens its work around the world.

About 8,000 migrants are known to have died on Italian shores alone in the past decade, ICMP director Kathryne Bomberger said.

With the new Swiss funding, the ICMP will work with Italy, Greece, Cyprus and Malta "to take stock of where they stand" in efforts to trace the missing.

"The numbers are huge," she told AFP, adding that finding "the survivors of those who are missing is going to be difficult ... it does take an international organization to connect the dots."

The first phase of the program will be to assess the situation -- such as finding out how many unidentified bodies have been found in those four countries and where the remains are held or have been buried -- and boost cooperation among all nations and agencies involved.

A second phase -- which would most likely begin after 2019 depending on whether the program secures funding -- would allow the organization to start the laborious work of taking DNA samples and trying to match them with relatives who have reported a missing family member.

The ICMP also hopes to help track down thousands of children believed to have been trafficked after being separated from their families en route.

There is no complete estimate of the missing, dead and trafficked and "so far no one has really been found because the issue is falling between the cracks," Bomberger said.

Last month, the International Organization for Migration (IOM) said 3,033 refugees had died crossing the Mediterranean this year, a 40-percent drop from last year's record of 5,000 known or suspected drownings.

"Italy and most likely Greece now are confronted with an abnormal situation, which absolutely exceeds their capabilities," said Bomberger.

She hopes the ICMP can help "alleviate the burden" on national police and forensic authorities by taking over the DNA analyses.