Catalan election campaign ends in tight race ahead of vote 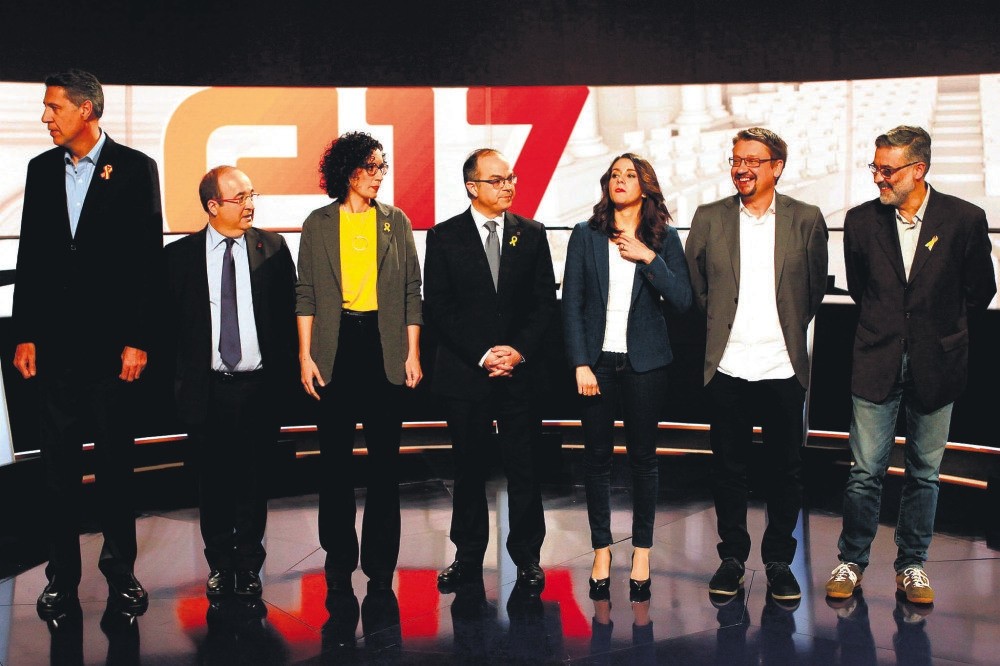 Leaders of Catalonian political parties pose before taking part in a televized debate ahead of the Catalonian regional elections, Barcelona, Dec. 18.
by Compiled from Wire Services Dec 20, 2017 12:00 am

Political parties for and against Catalonia's independence from Spain made a final effort to convince voters as campaigning for a regional election ended yesterday. Tomorrow's election will be held in exceptional circumstances as it was ordered by the Spanish government when it seized control of the region, dismissed its government and dissolved the regional parliament following a declaration of independence by separatist lawmakers there Oct. 27.

Several members of the ousted Cabinet, including former Catalan President Carles Puigdemont, are campaigning from Brussels where they have sought refuge from Spanish justice while others are in jail in Spain on provisional rebellion charges.

His former deputy president, Oriol Junqueras of the ERC leftist republican party, is in jail outside Madrid where his campaigning is curtailed.

Puigdemont left for Belgium at the end of October. He now faces charges of sedition, rebellion and misuse of public funds over his government's independence drive and could be jailed before his trial.

But in a surreal twist to the crisis, he announced his candidacy from exile, pledging to recover the "dignity" of the Catalan people after being "humiliated" by Madrid.

Victory for Puigdemont would be a blow to Spanish Prime Minister Mariano Rajoy, who deposed him after the Catalan parliament declared independence on October 27 following a banned referendum.

While Spain eventually dropped an international arrest warrant for Puigdemont, he will still be detained if he returns to the country, raising the question of how he might govern should he win.

The parties of Puigdemont and Junqueras, along with a small anti-capitalist group, held a slim majority in the last parliament, enabling them to push ahead with the independence drive but it remains to be seen whether they can stick together after Thursday's election.

Recent polls indicate the vote will see a close race between Junqueras, Puigdemont and Ines Arrimadas of the pro-Spanish unity Ciutadans (Citizens) party, but no group is likely to win a majority.

"I expect there to be an impasse Thursday and we are going to face quite a few weeks of attempts to form a government," said Andrew Dowling, a specialist in Catalan history at Cardiff University in Wales, as reported by AP. Dowling said the campaign showed the pro-secession bloc still had solid support but that the anti-independence side had come to life and posed a serious challenge.

Spain has said it will return full autonomous powers to Catalonia once a law-abiding government is elected.

Not all Catalans are keen on breaking away from Spain, with polls showing they are roughly evenly split. And while those who voted in the Oct. 1 independence referendum were overwhelmingly in favor, less than half of eligible voters went to the polls in a vote that had been outlawed by Spain's Constitutional Court and was marred by police violence trying to stop it. In the weeks since the Oct. 1 vote, more than 1,500 businesses have moved their official headquarters out of Catalonia to ensure they could continue operating under European Union laws if Catalonia secedes.