Europe to see surge in migrants due to global warming, scientists say 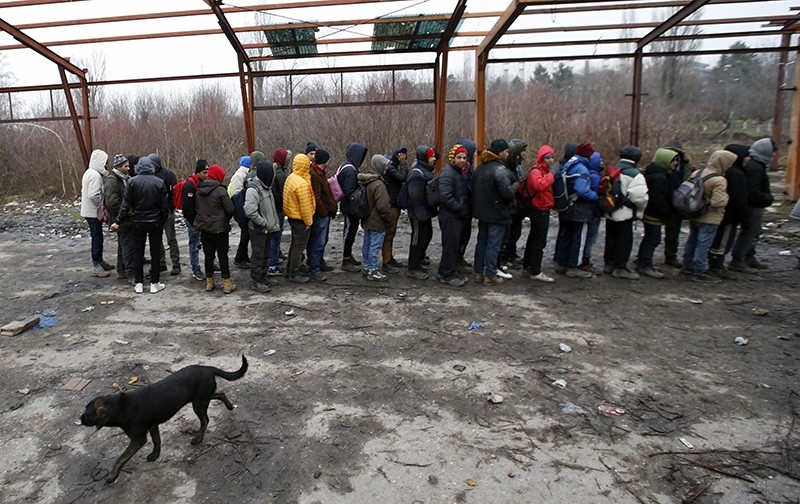 Migrants queue for food in an abandoned factory in the western Serbian town of Sid, near Serbia's border with European Union member Croatia, Monday, Dec. 18, 2017. (AP Photo)
by Associated Press Dec 21, 2017 12:00 am

Europe could see a surge in "climate refugees" as global warming increases poverty and hardship elsewhere in the world, scientists said Thursday.

Experts have long warned that rising temperatures and extreme weather could increase the number of people in poor countries seeking refuge in richer, more temperate nations, but the phenomenon has previously only been studied at a small scale.

In a study published Thursday in the journal Science, researchers examined asylum applications in the EU between 2000 and 2014 from 103 countries around the world. This preceded the spike in migration to Europe from war-torn countries such as Syria, Iraq and Afghanistan in 2015 and 2016 that prompted a political backlash against migrants in many European countries.

"We find a statistically significant relationship between fluctuations in asylum applications and weather anomalies," the U.S.-based authors wrote of the 15-year period.

They concluded that the number of applications increased the more a country of origin's average temperature diverged from 20 C (68 F) — the best temperature for growing crops. Higher temperatures were more likely to increase the numbers than lower temperatures, they found.

"It's the first study that draws a link between temperature and international migration on a global scale, and finds a link," said Jacob Schewe, a researcher at the Potsdam Institute for Climate Impact Research in Germany who wasn't involved in the study.

Working from a baseline average of 351,000 applications a year, the study concludes that the number of asylum-seekers to the EU could rise by more than a quarter by 2100 even if global warming slows. However, if emissions of greenhouse gases continue at current rates, asylum request could almost triple to over a million a year by the end of the century.

Although economic hardship isn't usually seen as grounds for asylum in most European countries, the study found an increase in requests being granted to migrants from countries that had experienced weather shocks.

The authors, Wolfram Schlenker and Anouch Missirian of Columbia University, said their study doesn't account for other factors — such as the outbreak of conflicts — that may impact asylum applications. They argue climate change should be seen as a "threat multiplier" that can increase other factors which might cause people to abandon their homes, including war, economic stress and famine.

Schlenker said the impact of climate change on agriculture may also not be immediate.

"It might be that you have a one-year bad weather shock, but if you have some crops stored you can basically overcome that," he said in a telephone interview. "But if it gets permanently hot in the future and you never get a good crop again then you might move."

Schlenker said the findings should be a wakeup call for rich countries that think they are insulated from the worst effects of global warming.

"A lot of people argue that climate impact will mainly hit developing countries, but this shows it will have big spillover effect," he said.

The study received funding from the European Commission and the U.S. Department of Energy.