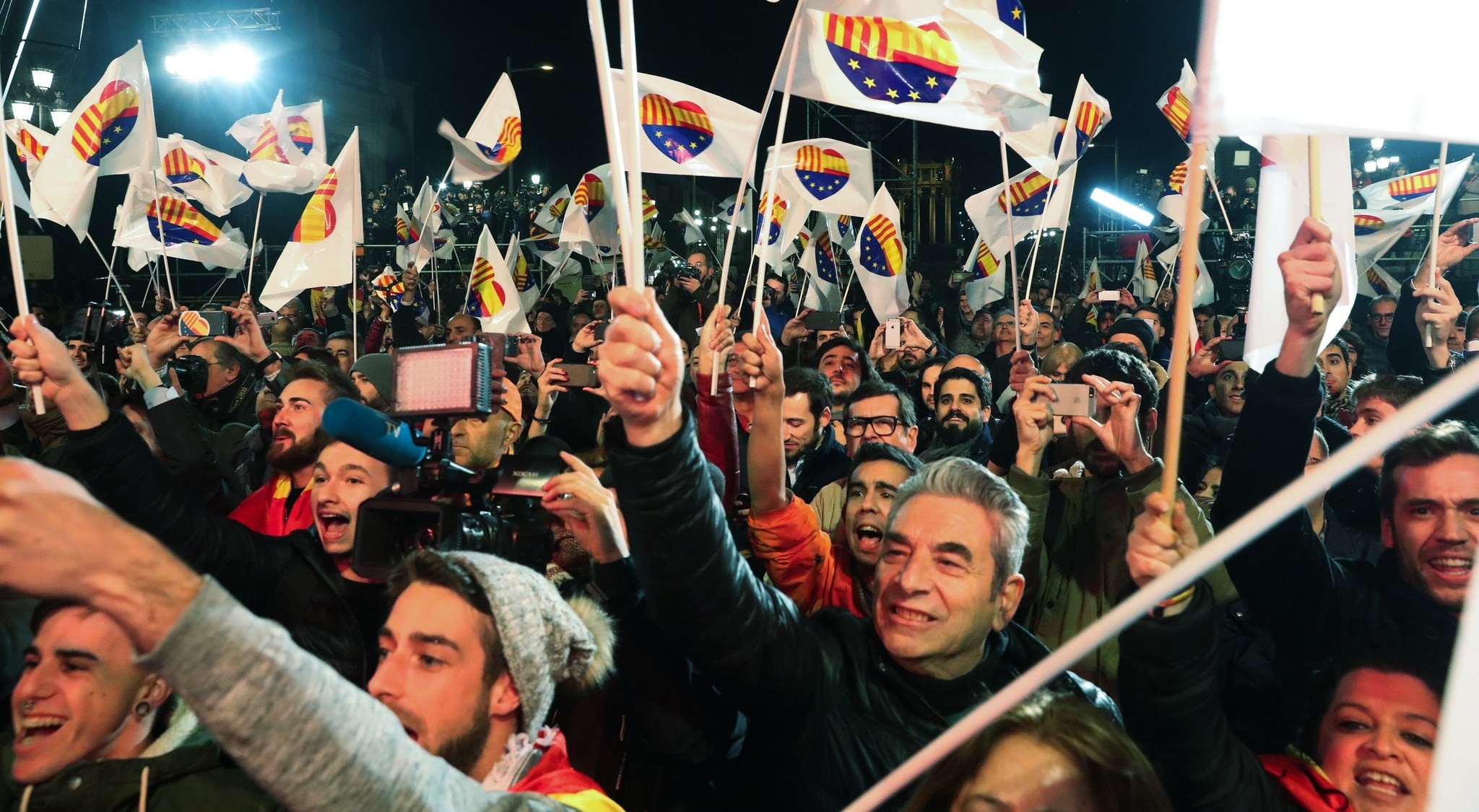 Suporters of Ciudadanos party celebrate the results of the Catalan regional elections at a hotel in Barcelona, Spain, 21 December 2017. (EPA Photo)
by Dec 22, 2017 12:00 am

With turnout at a record high and 99.9 percent of the ballots counted, the election handed a mandate back to the region's ousted separatist leaders, even after they campaigned from exile and behind bars.

In a clear indicator of the huge gulf over independence afflicting Catalan society, anti-secessionist centrist party Ciudadanos had the biggest individual result with 37 of the 135 seats in the regional parliament.

"It's a strange feeling. We won the majority of seats, but we lost in votes," 26-year-old doctor and separatist supporter Fran Robles told AFP after the results were announced.

"It's a good reflection of the reality that Catalonia is politically divided," he added.

But unless the three pro-independence lists fail to clinch a deal to work together in the coming months, they will rule Catalonia with 70 of the 135 seats in parliament -- two less than their previous tally of 72.

For Catalans on both sides of the divide the day had been a moment of truth, following weeks of upheaval and protests unseen since democracy was reinstated following the death in 1975 of dictator Francisco Franco.

"This is a result which no one can dispute," deposed leader Carles Puigdemont said from self-imposed exile in Belgium, emboldened by the separatists' win.

"The Spanish state was defeated. (Prime Minister Mariano) Rajoy and his allies lost," he told reporters.

The Spanish government called the election after it took the unprecedented step of stripping Catalonia of its treasured autonomy in the aftermath of an independence declaration on October 27 that rattled a Europe already shaken by Brexit.

At stake was the economy of a region that has seen its tourism sector suffer and more than 3,100 companies -- including the largest banks, utilities and insurers -- move their legal headquarters out of Catalonia since the referendum.

The declaration came weeks after a banned independence referendum on October 1, which saw a police crackdown that sent shockwaves around the world.

Rajoy and his conservative cabinet tried to nip the independence movement in the bud, sacking the regional government and dissolving its parliament.

In a further obstacle for the separatist cause, the judiciary pressed charges of rebellion, sedition and misuse of funds against the secessionist leaders.

Puigdemont, who had fled to Belgium where he tried to rally international support for the separatist cause, has not since returned to Spain, where he faces arrest.

His Together for Catalonia list nonetheless secured the best result of the three separatist groupings -- in a major upset for Rajoy's government.

But in Belgium, a separatist supporter warned against triumphalism.

"It's a bitter victory," said Michel Vila, a 70-year-old retired engineer who has lived in Belgium for 30 years.

Analysts were swift to note that what the separatists' victory will mean in practice remains a mystery.

"It is unclear whether Puigdemont will be able to be re-appointed ... as he will be arrested if he comes back to Spain," said Antonio Barroso, political analyst at the Teneo research centre.

"As a result, the investiture process will be far from straightforward, and the risk of new elections in 2018 remains high," he added.

Crucially, the pro-independence camp is not expected to attempt another breakaway from Spain but rather try to enter into negotiations with Madrid.

By fleeing to Belgium, Puigdemont said he aimed to win the support of the European Union for his cause.

But the EU has so far backed Rajoy, saying it supports constitutional order, and that it is an internal matter for Spain.

The European Commission stressed its stance remained the same regardless of the result of the vote.

On the other side of the divide, Ciudadanos candidate Ines Arrimadas saw the glass half full, celebrating her centrist party's lead in votes.

"The nationalists will never again be able to speak in the name of all Catalonia. We are all Catalonia," she said in a speech to supporters after the result.