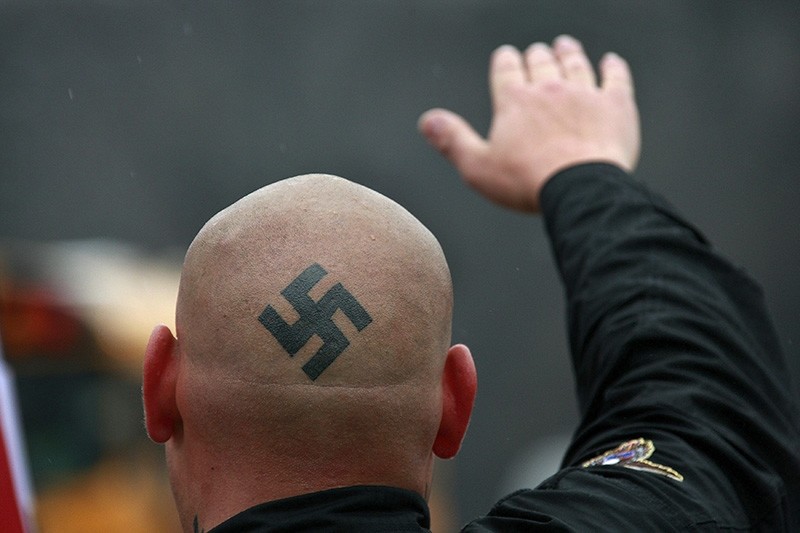 Neo-Nazi protestors organized by the National Socialist Movement demonstrate near where the grand opening ceremonies were held for the Illinois Holocaust Museum & Education Center April 19, 2009 in Skokie, Illinois. (Scott Olson/Getty Images/AFP)
by Jan 02, 2018 12:00 am

A Swedish court on Tuesday convicted the head of a neo-Nazi movement of "incitement to racial hatred" more than a year after he held a speech at a Stockholm rally that turned violent.

The Nordic Resistance Movement's leader Simon Lindberg, 34, held a speech which "spread and expressed contempt for groups based on their race, skin color, national or ethnic origin by shouting 'Sieg Heil' while raising his right arm upwards," the Stockholm district court said in its verdict, seen by AFP.

Five people were arrested and two were injured in clashes between police and anti-fascists at the November 2016 rally, organized by the group.

The court said Lindberg had never been convicted before and that his crime merited punishment of one month in prison.

But because he had been speaking at a rally which had a permit the sentence was suspended and combined with an 800 kronor (81 euros, $98) fine instead.

The Nordic Resistance Movement, founded in 1997, is described as the most violent Nazi organization in Sweden by Swedish anti-racism magazine Expo.

The group, which promotes an openly racist and anti-Semitic doctrine, has nearly 200 active members, according to the magazine.

A district court in Sweden's second largest city of Gothenburg in July sentenced three neo-Nazi activists for up to eight and a half years in prison over bomb attacks against refugee shelters that left one person seriously injured.