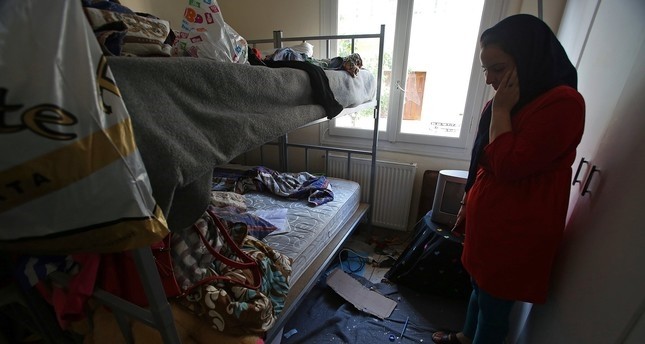 Mother of 11-years-old Afghan boy Amir stands inside her children's bedroom after an attack by unknown individuals in Athens, Greece, 03 November 2017. (EPA Photo)
by Daily Sabah Jan 05, 2018 12:00 am

More than 30 immigrant houses have come under attack since December 25 in a port Greek city near Athens, a rights group reported as xenophobic attacks continue to spike in areas with a large immigrant population.

The Movement Against Racism and the Fascist Threat (KEERFA) said Thursday that the houses located in the Piraeus suburbs of Renti and Nikaia neighborhoods were bearing hallmarks of the far-right extremist Golden Dawn supporters.

Constantinou said the assaults have become a routine for the far-right group with a new report of an attack surfacing at least three times a week.

"Despite complaints filed by migrants with the police, the group continues to be active in the neighborhood," KEERFA said on Thursday, adding that the assaults have escalated since Christmas.

KEERFA said that the attacks included throwing stones, sticks, bottles and spray-painting walls of the migrants' homes, shouting racist slogans at them, breaking their windows and frightening the residents.

Golden Dawn is linked to violence through hooliganism and its leadership was even implicated in the trial for the neo-Nazi murder of an anti-fascist hip-hop artist in 2013.

It became the third-strongest party in the Greek parliament after winning seven percent of the votes in the 2015 elections. According to current opinion polls, it is holding its ground among voters, now at 6.8 per cent.