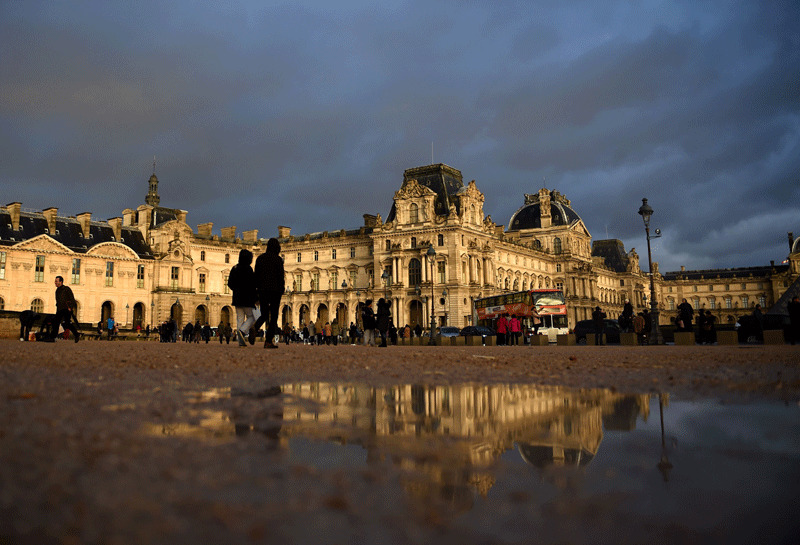 Tourists walk past the Richelieu wing of the Louvre Museum under an overcast sky (AFP Photo)
by Daily Sabah with AP Jan 08, 2018 12:00 am

The Louvre Museum says it welcomed 8.1 million visitors in 2017, up 10 percent compared to the previous year, a sign of tourism revival in Paris.

Tourism in the French capital took a hit in 2016 after a series of attacks by Islamic extremists the previous year.

Foreign visitors represent 70 percent of the museum attendance, a statement from the Louvre Museum said Monday.

The Louvre is the world's most-visited museum.

Definitive figures of tourist numbers in Paris have not been released yet for 2017 but a rise of 10 to 12 percent is expected, according to the Paris tourist office, based on hotel reservations.

The Louvre Palace is a former royal palace located on the Right Bank of the Seine in Paris, between the Tuileries Gardens and the church of Saint-Germain l'Auxerrois.

Originally a fortress built in the medieval period, it became a royal palace in the 14th century under Charles V and was used from time to time by the kings of France as their main Paris residence. Its present structure has evolved in stages since the 16th century.

In 1793 part of the Louvre became a public museum.