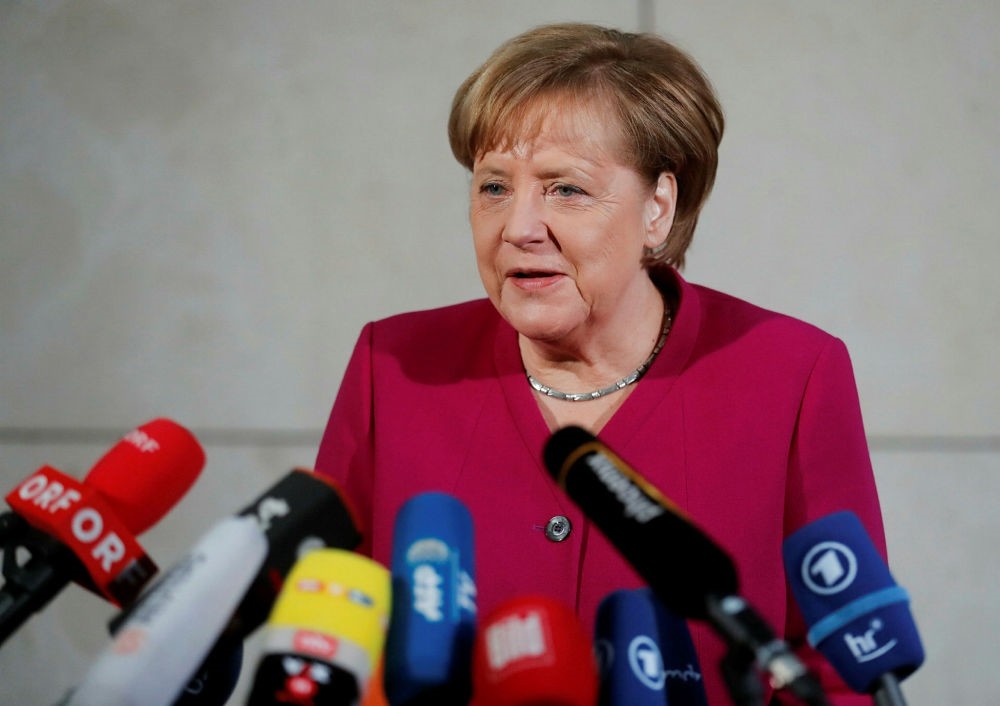 After days of explanatory talks, German parties will now decide whether they want to move to formal negotiations on establishing a new government

Chancellor Angela Merkel's conservative CDU/CSU bloc and Social Democrats (SPD) met for a fourth round of coalition talks yesterday, a day before both camps decide whether they want to move to formal negotiations on establishing a new government.

The country hit 108 days without an elected government after the parliamentary election on Sept. 24, the longest period since the the Second World War.

However, German Social Democrats sounded downbeat about their coalition talks with Chancellor Angela Merkel's conservatives. Merkel, weakened by an election setback in September, turned to the left-leaning Social Democrats (SPD) to seek a re-run of their so-called "grand coalition" after the collapse in November of talks on a three-way coalition untested at national level. The chancellor needs the coalition talks to succeed in order to avoid her personal authority being further undermined and Germany's international standing diminished. The Social Democrats know this, and are playing hard ball.

"The mood is like the weather," Ralf Stegner, one of the SPD's deputy leaders, said as he gazed at the cloudy sky above Berlin ahead of yesterday's talks, as reported by Reuters.

Senior officials from the SPD, Merkel's Christian Democrats (CDU) and their Bavarian sister party, the Christian Social Union (CSU), have been holding exploratory talks this week on whether to pursue formal coalition negotiations. The talks are due to conclude today, before SPD leaders recommend to their members whether they should shift into official negotiations.

Participants have described the negotiations as "good", but SPD leaders need to convince their party members as they are offering them a vote on Jan. 21 on whether to proceed.

The leader of the Jusos youth branch of the SPD told broadcaster ARD that a deal between the coalition negotiators to drop plans to lower carbon dioxide emissions by 40 percent from 1990 levels by 2020 "was not a good start to these talks".

Merkel has ruled with the SPD in a sometimes unwieldy "grand coalition" in two of her three previous terms in office, including in the last parliament from 2013-2017. But both parties bled support in the Sept. 24 election, which saw the far-right Alternative for Germany (AfD) enter the Bundestag (national parliament) for the first time.

Many in the SPD rank-and-file oppose a repeat of the grand coalition as they fear it will further diminish the identity of the party, which suffered its worst result in September's vote since 1933. Some SPD members are also concerned that a new grand coalition would make the AfD the main opposition party.

Despite such reticence, German media reported on Tuesday that conservative and SPD negotiators had reached agreement on a law to attract skilled immigrants. Should the two biggest party groups fail to agree on moving ahead, Merkel could try to form a minority government or Germany could face new elections.