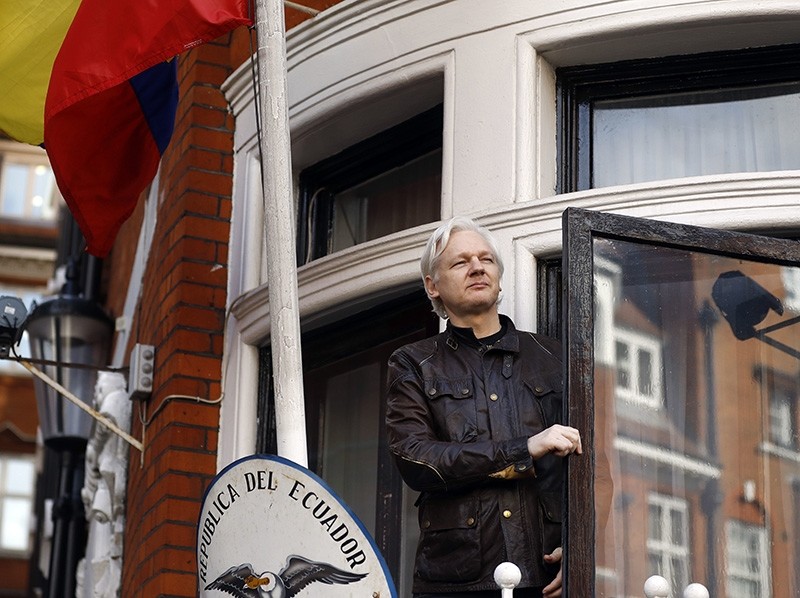 In this Friday May 19, 2017 file photo, WikiLeaks founder Julian Assange greets supporters outside the Ecuadorian embassy in London. (AP Photo)
by Compiled from Wire Services Jan 11, 2018 12:00 am

Britain has refused a request by Ecuador for WikiLeaks founder Julian Assange to be given diplomatic status, a spokesman for Britain's Foreign Office said.

"The government of Ecuador recently requested diplomatic status for Mr Assange here in the UK. The UK did not grant that request, nor are we in talks with Ecuador on this matter," the statement said.

Assange has been holed up for more than five years in the Ecuadorean embassy in London where he was granted asylum in 2012 to avoid extradition to Sweden over rape allegations.

Ecuador's attempt to obtain diplomatic status for the 46-year-old comes as part of the country's broader efforts to resolve the case of their long-term lodger.

Sweden dropped their investigation over the 2010 allegations last year, but British police have said they are still seeking to arrest him for failing to surrender to a court after violating bail terms.

Assange's name has appeared in an Ecuadorean government database of citizen identification numbers, fuelling speculation that he may have received citizenship from the Andean country.

For some, Assange is a cyber hero for exposing government abuses of power and championing free speech but to others he is a criminal who has undermined the security of the West by exposing secrets.

Assange always denied the rape allegations and said they were a ploy to get him whisked off to the United States.