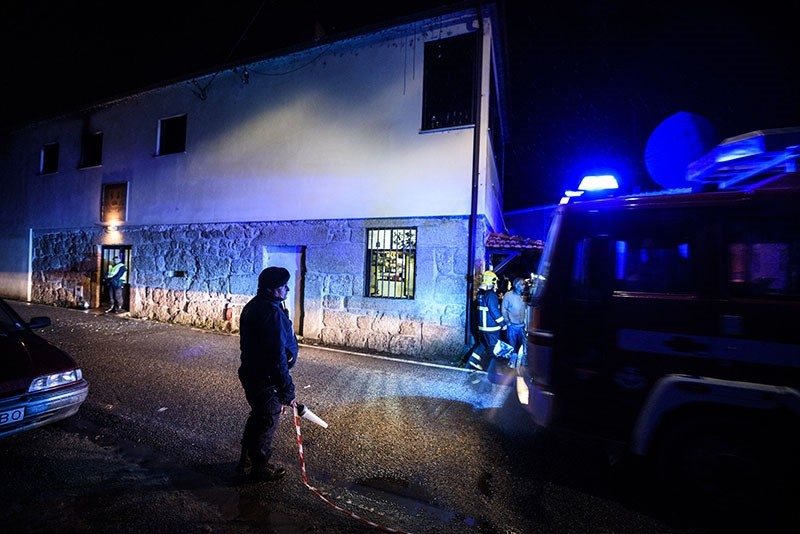 Policemen and firefighters work outside the building, in the background, where a heater exploded killing people in the village of Vila Nova da Rainha, outside Tondela, northern Portugal, in the early hours of Sunday, Jan. 14 2018. (AP Photo)
by Compiled from Wire Services Jan 14, 2018 12:00 am

At least eight people have been killed and dozens injured in a fire and stampede in a local leisure association in the town of Vila Nova da Rainha in Portugal on Saturday night, officials said.

Mayor Jose Antonio de Jesus said in televised remarks that over 60 people had been taking part or watching a card tournament in the two-story popular gathering place of the town 260 kilometers northeast of Lisbon when the fire erupted.

"Several dozen people have been injured, some lightly and others gravely, and are still being assisted," he said.

He would not say what had caused the fire, but local media cited firefighters on the spot as saying that an explosion of a heating boiler was the likely cause.

Tondela Mayor Jose Antonio Jesus told RTP public television that the fire broke out when a wood-burning stove exploded as people gathered for an amateur card tournament where they were playing Sueca, a very popular game in Portugal

The fire broke out near Tondela, which lies between the northern towns of Coimbra and Viseu which were badly hit by a series of deadly wildfires in October, with some of the more seriously wounded airlifted to hospital by helicopter, he said.

The fire spread very rapidly but was finally quenched after an hour, the Tondela fire service said.

Portugal suffered from its deadliest ever forest fires last year, which killed a total of over 100 people - the worst loss of human lives in living memory in the country.