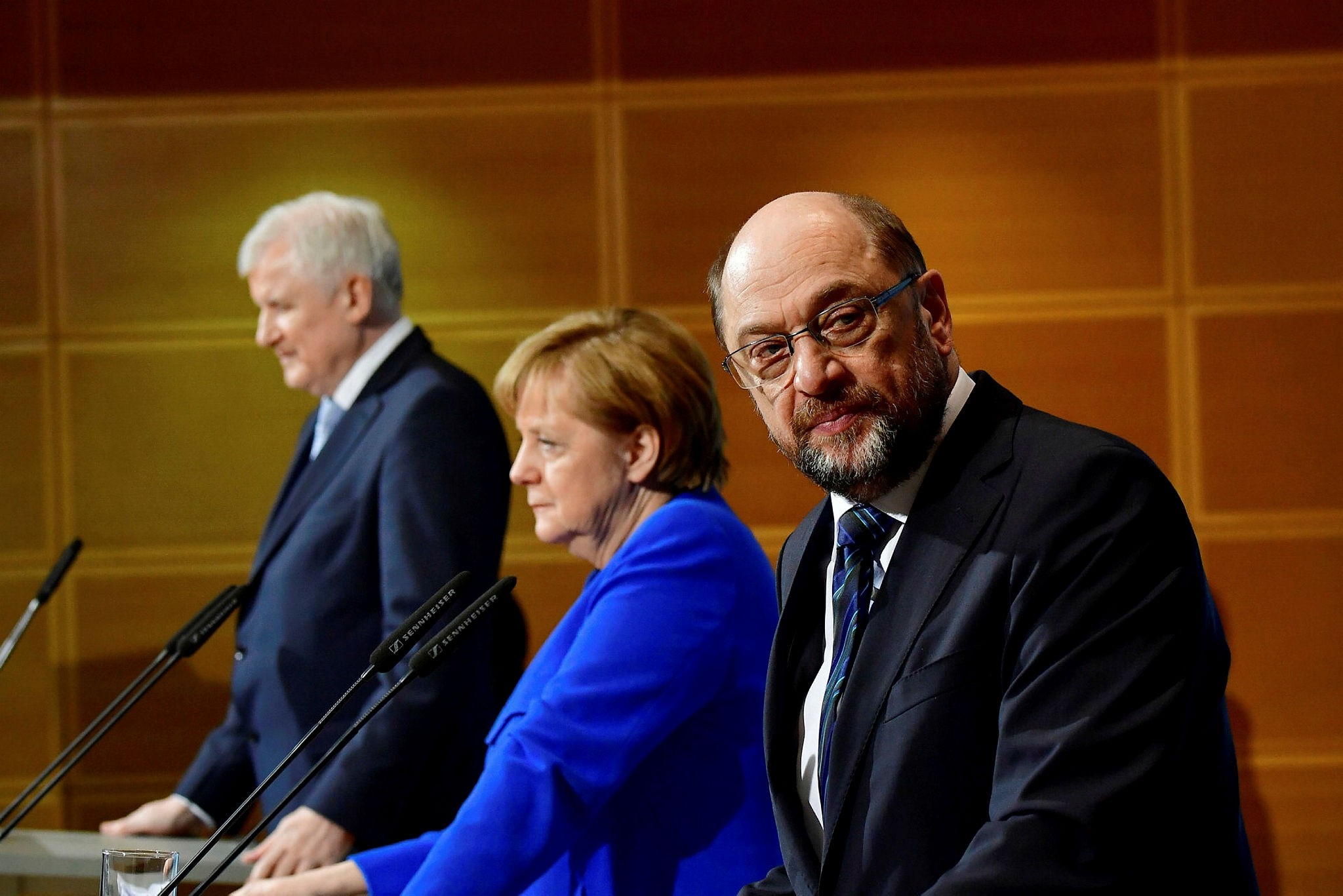 German leader of the SPD Martin Schulz (R) next to Chancellor Angela Merkel and Horst Seehofer of the CSU give a press conference after talks to form a new government at the SPD's Headquarters in Berlin, Jan. 12.
by Daily Sabah Jan 15, 2018 12:00 am

The European Parliament is planning to amend the Dublin Regulation, which requires asylum seekers to register in the first European Union member state they set foot on. That state would also be responsible for processing these requests.

The proposed amendment, however, could possible shift that responsibility to wherever any asylum seeker claims to have family in the European Union.

Under such a change, "Germany would have to accommodate significantly more asylum seekers," said an Interior Ministry memo, quoted by Der Spiegel.

Furthermore, any and all caps on refugees and immigrant intakes would be nullified.

This would effectively render Germany's decision to cap immigrations influxes at around 180,000 to 220,000 as agreed upon by the working groups aiming to form a new German government.

Germany has been struggling to form a new government since the Sept. 24th elections; however, Chancellor Angela Merkel's Christian Democrats (CDU), their sister party the CSU and Social Democrat Party leader Martin Schultz have agreed to go into official coalition talks, now made harder by the proposed EU bill.

The proposed reform of the Dublin Agreement was put forth last November and now has to be approved by the European Council, which is composed of every single member states' government leaders.

Despite Germany's worries, given the circumstances, the proposal is not expected to have much support. Between the nations of Eastern Europe, who never wanted any immigration at all, and the ever-more skeptical western nations, as well as the ones in Southern Europe, such as Greece, Italy and Spain that became the frontlines of the crisis, the proposed reform is not guaranteed to pass.

While the exact number of people that have entered Europe since 2015 is unknown, it is estimated that it is about 2 to 3 million, with the United Nations Human Rights Commission reporting that tens of millions more are on the move, mainly from sub-Saharan Africa.

While Germany was probably Europe's biggest supporter of asylum seekers and chain-migration, it now worries that it in particular will be negatively affected by what it sees as immigration on "an entirely different scale."

The German Interior Ministry noted that it was particularly worried by a section of the proposal that stated: "The mere assertion of a family connection was enough."

"As a result, a member state hosting many so-called 'anchor persons' will take over responsibility for far-reaching family associations."

"If every one of the more than 1.4 million people who have applied for asylum in Germany since 2015 becomes an anchor for newcomers arriving in the EU, then we're dealing with [numbers] on an entirely different scale compared to family reunifications," said Ole Schröder, a parliamentary state secretary in Germany's Interior Ministry.

This is very similar to the problem that the United States is facing with so-called "anchor-babies" and chain-migration based on family ties.

Another part of the CDU-SPD coalition agreement points to restrict "family reunifications" due to the immense consequences that could have.

CDU politicians Stephan Mayer and Stephan Harbarth stressed that the Dublin reform could have profound implications for Germany.

In a letter to party colleague Manfred Weber, who leads the center-right European People's Party group in the European Parliament, they wrote, "The negotiations on the Common European Asylum System should, under no circumstances, compound the already asymmetrical burden-sharing [of refugees]."