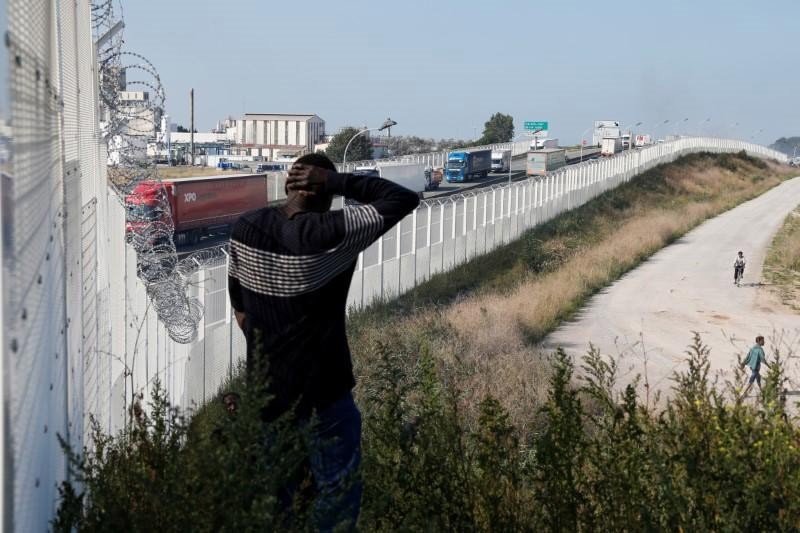 Migrant walks past the fence which secures the approach to the city from migrants trying to reach Britain, in Calais, France, September 21, 2016. (Reuters Photo)
by Compiled from Wire Services Jan 17, 2018 12:00 am

France and Britain will sign a new treaty on the management of their English Channel border controls at a summit near London on Thursday, the Elysee Palace said.

The treaty, set to be announced at a summit in London on Thursday, will "complete the Le Touquet accord", Emmanuel Macron's office said in reference to a 2003 deal that effectively put Britain's border in northern France. The details are "still being finalized", the French presidency said.

The treaty is expected to set out maximum timeframes for British authorities to decide on applications from migrants in France who have a strong claim for admission to Britain, two sources said on condition of anonymity.

Those would include unaccompanied children and people with immediate family already living in Britain.

The original text, which came into force in February 2004, implemented joint controls at coastal ports in both countries as Britain, which is not part of Europe's Schengen visa-free zone, looked to bolster efforts to keep migrants out.

Later accords led to Britain financing some of the controls and security operations in Calais, just across the English Channel from its own port in Dover.

The two sources said Britain is also expected to agree to further funding for France's security measures at Calais ferry port, the nearby Channel Tunnel entrance and other border control points.

The French side will also raise the question of British funding for local development projects in Calais, as hinted by Macron on Tuesday.

Hundreds of migrants are camping out in the English Channel port town of Calais in the hope of crossing illegally into Britain. The issue is a hot political topic in both countries.

Their numbers were estimated at 10,000 until authorities dismantled the notorious "Jungle" camp in late 2016.

Migrants remain in the area, with police routinely breaking up makeshift camps of people hoping to head to Britain, a favored destination for Afghans and east Africans.

French officials argue the Le Touquet deal has worsened Europe's migrant crisis by creating a huge backflow of migrants in the area, lured by a belief that it is easier to secure asylum and work permits in Britain.

A French human rights commission in 2015 said the accord had made France the "police branch" of Britain's immigration policies.

Macron made a renegotiation of the Le Touquet deal one of his campaign pledges, and Interior Minister Gerard Collomb signaled Tuesday that Paris would ask Britain to take in more refugees from northern France and increase its funding.

"It's in their interests that things go well," Collomb said.

In November, Collomb said there were about 300,000 undocumented migrants in France, and the government registered a record 100,000 asylum claims last year.