Amsterdam airport cancels all flights due to strong storm blasts 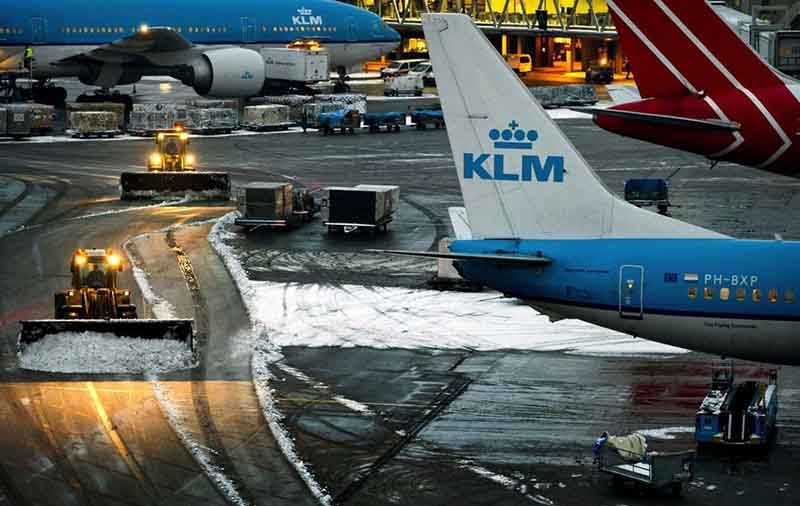 Amsterdam's Schiphol Airport suspended all flights for nearly an hour Thursday and the Dutch national rail service halted trains across the country as a powerful storm battered the Netherlands and lashed other parts of Europe.

Passengers were briefly stranded as Schiphol halted flights shortly after 11 a.m. (1000 GMT) before resuming around noon (1100 GMT). Flag carrier KLM already had scrapped more than 200 flights before the storm.

Traffic on Dutch roads was plunged into chaos, with the wind blowing over tractor-trailers and toppling trees and hampering efforts to clean up the mess. In Amsterdam, authorities halted all trams and closed the city's zoo.

The national weather service said it recorded wind gusts of up to 140 kph (87 mph) in the southern port of Hook of Holland as the storm passed over the Dutch coast.

Water authorities in the low-lying Netherlands also were closely monitoring the storm and closed a storm barrier 75 kilometers (47 miles) east of Amsterdam because of high-water levels.

Before halting all trains, the Dutch rail service reported numerous incidents including a collision between a train and a trampoline. The service had no further details of the collision.

In Amsterdam, a man had a narrow escape when a tree was blown over onto his scooter. He escaped unhurt.

Neighboring Belgium also was hit by the storm with the port of Ghent closed because of the high winds and tram traffic halted in parts of the capital, Brussels.

German Railways canceled all train services for the country's most populous state of North Rhine-Westphalia as the storm moved to Germany.

The square in front of Cologne's famous Cathedral was also partially cordoned off Thursday as a precaution amid fears masonry could be blown loose. Children in many regions of Germany stayed at home because schools remained closed.

In Britain, power was knocked out to thousands of homes and gale-force winds damaged some of the overhead power lines that supply trains and brought trees crashing onto the tracks, causing severe delays for thousands of commuters.

Driving conditions in parts of Scotland were extremely hazardous, with officials advising motorists to stay off the roads because of blustery winds, heavy snow and icy conditions.

In Romania, snowstorms and high winds left dozens of schools, several main roads and ports closed and thousands of people without electricity.

Interior Minister Carmen Dan said Thursday that some 32,000 people had no power in 13 counties. Authorities freed a bus carrying 22 people that was stranded in snowdrifts in the Galati region in eastern Romania.