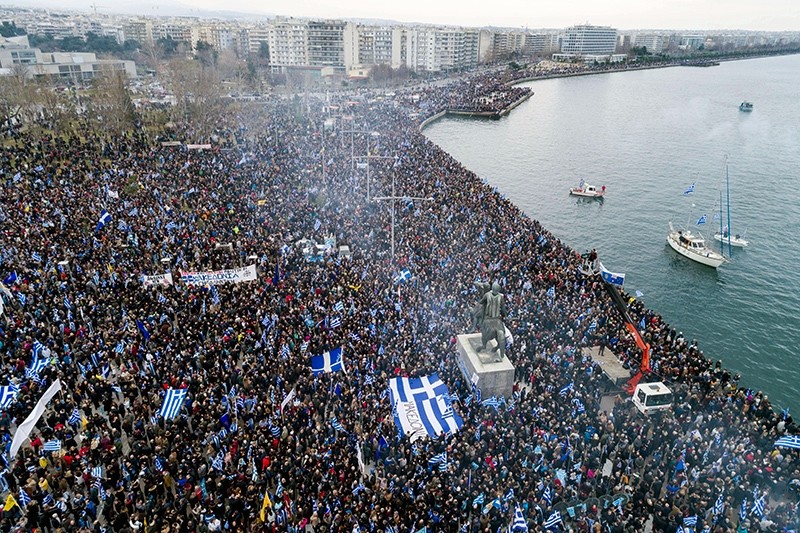 Thousands of protesters take part in a rally against the use of the term ,Macedonia, for the northern neighboring country's name, at the northern Greek city of Thessaloniki, Jan. 21, 2018. (AP Photo)
by Compiled from Wire Services Jan 21, 2018 12:00 am

Over 100,000 Greeks have gathered Sunday in the northern city of Thessaloniki to demand that neighboring country Macedonia change its name because it is also the name of the Greek province of which Thessaloniki is the capital.

The rally was staged in front of the statue of Alexander the Great, the most famous ruler of the ancient Greek Kingdom of Macedonia.

Athens argues that the name Macedonia suggests that Skopje has territorial claims to the northern Greek region of the same name, of which Thessaloniki is the capital.

The region was the centre of Alexander the Great's ancient kingdom, a source of Greek pride.

Greece's objections to the use of the name Macedonia since the Balkan country's independence in 1991 have hampered the tiny nation's bid to join the European Union and NATO.

"We demand that the term Macedonia isn't included in the name which they will agree on. This is not negotiable," said Leonardou, a 59-year-old writer from Thessaloniki, warning that if the Greek government does otherwise "there will be an answer from the Greek people".

The U.N. negotiator Matthew Nimetz — a 24-year veteran on the issue — said last week that he was "very hopeful" that a solution was within reach.