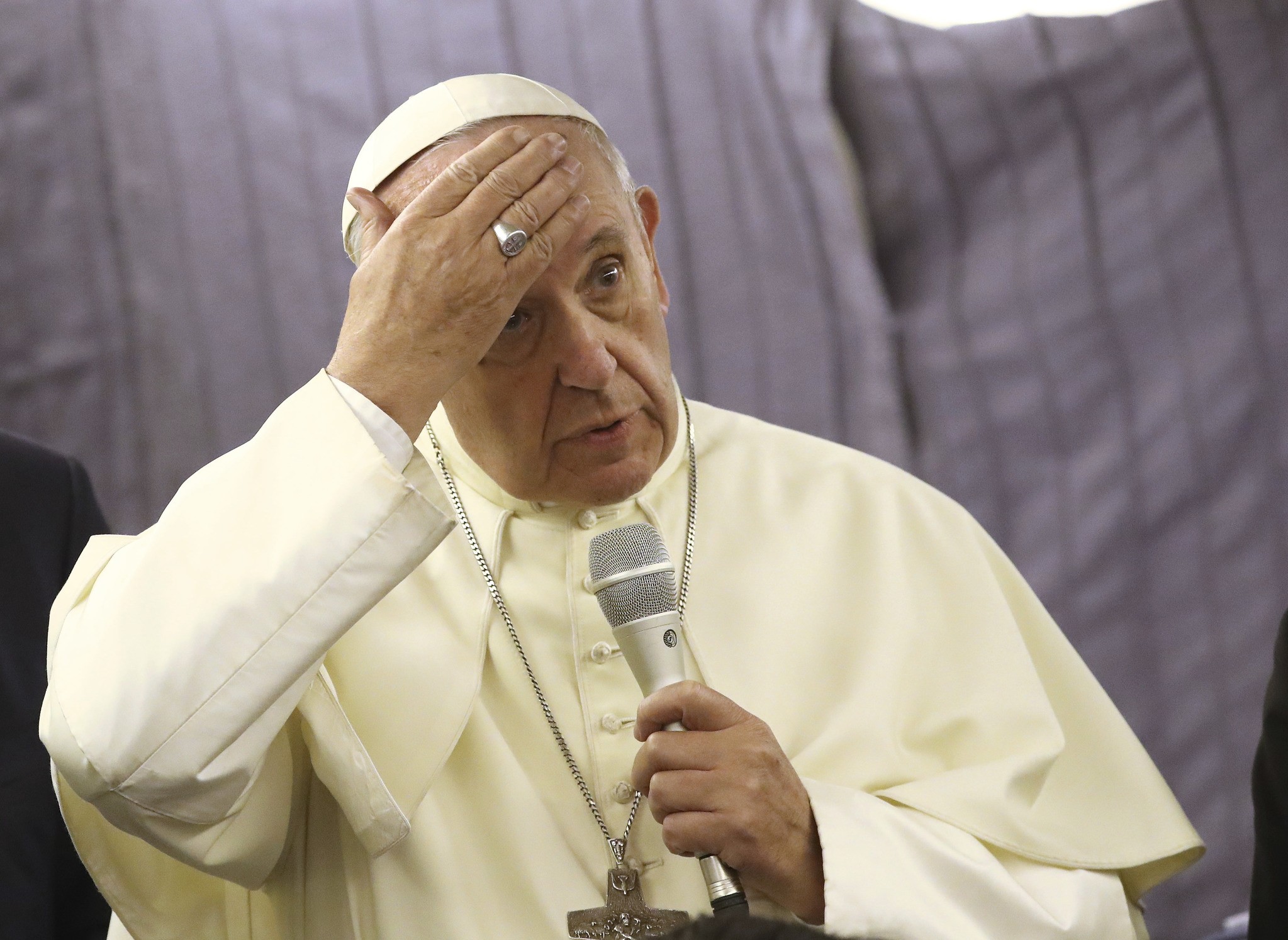 Pope Francis is apologizing for insisting that victims of pedophile priests show "proof," saying he realizes now it was a "slap in the face" to victims that he never intended.

But he doubled down in defending Chilean bishop Juan Barros, who is accused by victims of covering up for the country's most notorious pedophile priest. He also repeated that anyone who makes such accusations without providing evidence is guilty of slander.

Francis said: "I can't condemn him because I don't have evidence. But I'm also convinced that he's innocent."

Francis issued the partial mea culpa in an airborne press conference as he returned home from South America, where the scandal plunged the Chilean church into renewed crisis and revived questions about whether Francis "gets it" about abuse.

"I have to apologize," an unusually contrite pope told reporters aboard the plane returning to Rome from a week-long trip to Chile and Peru, saying he realized he had "wounded many people who were abused."

"I apologize to them if I hurt them without realizing it, but it was a wound that I inflicted without meaning to," he said. "It pains me very much."

In the latest twist to a saga that has gripped Chile, Francis said Barros, who is accused of protecting a notorious pedophile, would remain in his place in the diocese of Osorno because there currently was no credible evidence against him

Last Thursday, a Chilean reporter managed to get close the pope at the end of an event and shouted out a question about Barros.

"The day I see proof against Bishop Barros, then I will talk. There is not a single piece of evidence against him. It is all slander. Is that clear?" the pope replied in a snippy tone.

His comments were seen as trying to dismiss the credibility of accusers and was widely criticized by victims, their advocates and newspaper editorials in Chile and the pope's native Argentina.

On Saturday, even Cardinal Sean O'Malley of Boston, a key papal adviser, distanced himself with a statement saying the pope had caused "great pain."

SLAP IN THE FACE

Francis said on the plane: "I know how much they (abuse victims) suffer in hearing the pope say to them 'bring me a letter with the proof,' I realize that it is a slap in their faces, and now I realize that my expression was an unfortunate one."

Barros has been accused of protecting his former mentor, the Rev. Fernando Karadima, who was found guilty in a Vatican investigation in 2011 of abusing teenage boys over many years. Karadima denies the allegations, and Barros said he was unaware of any wrongdoing.

Barros was among the men Karadima trained about 20 years ago. Barros and three others went on to become bishops. A Chilean, Juan Carlos Cruz, said Barros saw Karadima abuse him.

In his comments on the plane, the pope disclosed that Barros had offered to resign twice in recent years but Francis rejected the offers.

"I can't condemn him because I don't have evidence and because I am convinced he is innocent," Francis said.

He said Barros would remain in his place unless credible evidence is found against him.

The statement from O'Malley on Saturday implicitly criticizing the pope was even more remarkable because O'Malley heads a papal commission advising the pontiff on how to root out sexual abuse in the Church.

Victims group have criticized the pope's record on abuse.

He defended it on the plane, saying that since he started his papacy in 2013, he had received about 25 requests for pardons by priests convicted of pedophilia, most of them very old.

"I have not signed even one," he said, denying a U.S. media report last year.

While the pope has vowed "zero tolerance" for sexual abuse, his efforts have sputtered.

A planned Vatican tribunal to judge bishops accused of covering up sexual abuse or mishandling cases never started and the much-touted commission O'Malley heads has been hit by defections by high-profile non-clerical members who had been victims of abuse when they were children.

The pope reminded reporters on the plane that on the first day of his trip to Chile he had expressed his "pain and shame" for the rape and molestation of children by priests and later met with two victims.

Juan Carlos Claret, a spokesman for anti-Barros Catholics in Osorno, southern Chile, said during the trip that he worried the pope's response to the reporter before the apology would discourage more victims from speaking out.

"What incentive will victims have to come forward when even if the courts and the Vatican have said they are right, in the end the pope says they are pure lies?" he said in an telephone interview.