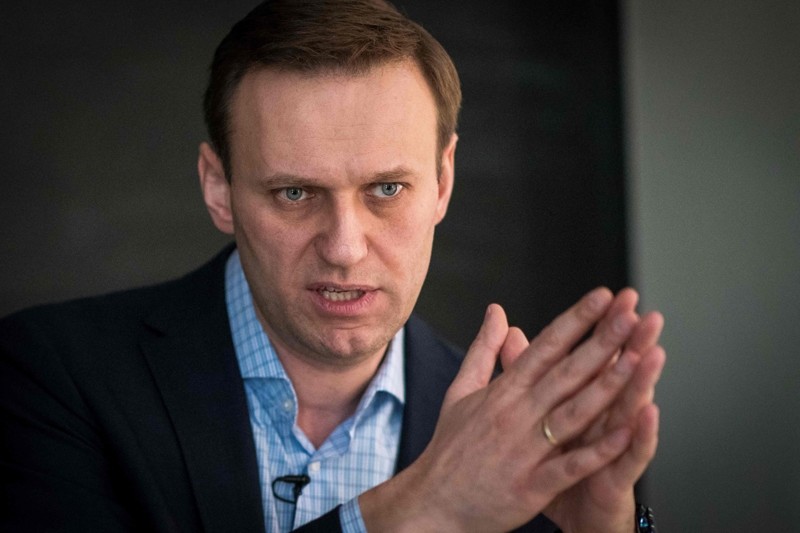 Russian opposition leader Alexei Navalny speaks during an interview with AFP at the office of his Anti-corruption Foundation (FBK) in Moscow on January 16, 2018. (AFP File Photo)
by Compiled from Wire Services Jan 22, 2018 12:00 am

Top Kremlin critic Alexei Navalny on Monday suffered a new blow in his bid to convince Russians to boycott March presidential polls when a court ordered the closure of the foundation behind his political activities.

Navalny, President Vladimir Putin's most formidable foe, had been leading a grass-roots campaign for a year ahead of the 2018 presidential vote, before election officials in December formally barred him from running. Navalny then vowed to mount a boycott campaign to lower the voter turnout, which would be an embarrassment for the Kremlin.

The charismatic opposition leader used the foundation to finance his failed attempt to run against President Vladimir Putin in the upcoming election and was planning on its support in his call for a "voters' strike".

Moscow's Meshchansky district court issued the ruling following a request from the justice ministry to pull the plug on the Fifth Season of the Year Foundation citing various irregularities, spokeswoman Yulia Kotomina said.

The court ruled that the foundation Navalny and his allies have used to rent premises and pay salaries at campaign headquarters should be shut down. The lawsuit was filed by prosecutors who said they found numerous violations at the foundation.

Navalny's campaign chief Leonid Volkov on Twitter described the ruling as absurd and vowed to appeal.

Navalny -- seen by many as the only genuine opposition to Putin -- was barred last month from running for the presidency because of a fraud conviction he says was politically motivated.

Putin, who was first elected president in 2000, is widely expected to win a fourth term and extend his Kremlin term until 2024.

After electoral officials rejected his bid, Navalny, 41, said he would use all means at his disposable -- including campaign offices across the country and more than 200,000 volunteers -- to try to persuade as many Russians as possible to boycott the polls.

Ruslan Shaveddinov, spokesman for Navalny's campaign, said they would appeal the ruling.

"Even if we have to shutter the fund, nothing will stop," he told AFP.

"The campaign will continue: we are training monitors and we are getting ready for a voter strike."

Navalny has called a major protest for Sunday.

Asked last year why Navalny had been barred from running, Putin -- who has refused to mention him by name in public -- said the opposition was hoping for a "coup" but would not succeed.