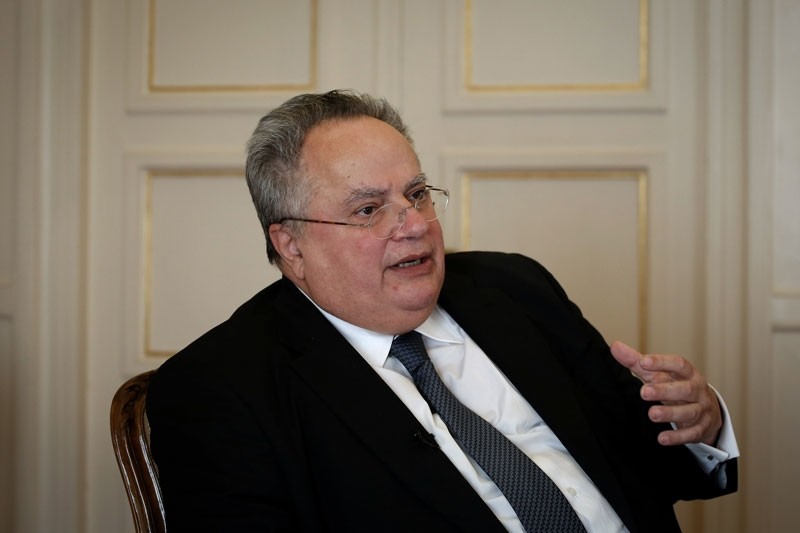 Greek Foreign Minister Nikos Kotzias speaks during an interview with Reuters at the Foreign Ministry in Athens, Greece, January 31, 2018. (Reuters Photo)
by reuters
Feb 02, 2018 12:00 am

Greece has launched an investigation after its foreign minister received a letter from unknown sources threatening him and his family over efforts to resolve a dispute over the name of Macedonia, the Greek civil protection minister said on Friday.

The authors wrote that they had three bullets for Foreign Minister Nikos Kotzias, in the letter sent to him on Thursday, Civil Protection Minister Nikos Toskas told ANT1 TV.

Kotzias is leading talks with Macedonia to resolve the dispute over its name, which has frustrated Macedonia's ambitions to join NATO and the European Union since the 1990s.

Greece has objected to Macedonia's name since Macedonia broke away from Yugoslavia in 1991. Greece has its own territory called Macedonia, and argues that its small northern neighbor's use of the name, along with contentious articles in its constitution, imply territorial claims over Greek land.

Because of Greek objections, Macedonia was admitted to the United Nations with the provisional name "The Former Yugoslav Republic of Macedonia", which remains its official title in international organizations.

The issue arouses strong passions among Greeks who consider Macedonia, the ancient kingdom ruled by Alexander the Great, to be an integral part of their homeland.

Hundreds of thousands of Greeks turned out at a demonstration on Jan. 21 in Thessaloniki, capital of Greece's Macedonia region, to protest against any use of the name by the neighboring state.

A rally in central Athens is scheduled for Sunday.

Toskas said that sending threatening letters to those who have been trying to settle a problem in a honest manner was "dangerous". Police were trying to identify who had sent the letter to the minister, he added.

In an interview to Reuters on Thursday, Kotzias said that Athens would submit draft proposals to resolve the dispute, expecting that a settlement could be reached by June.

"Police authorities have taken action to find out who is trying to inflame the situation," Toskas said.