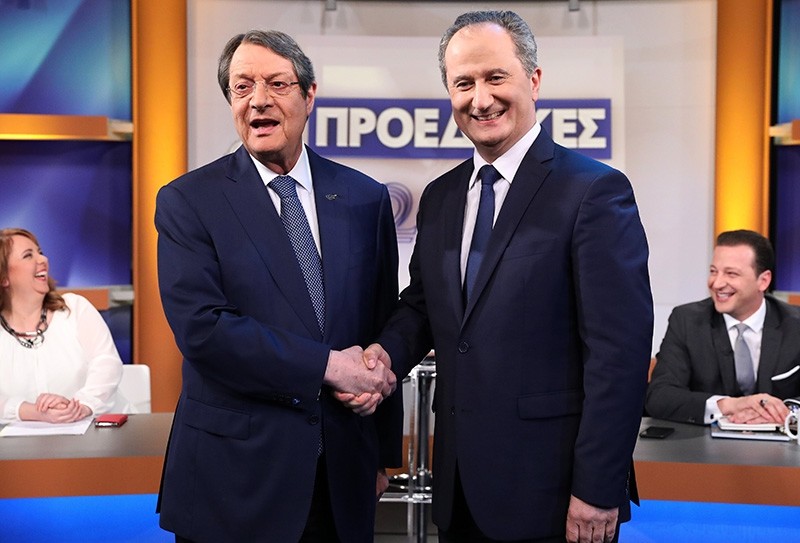 Greek Cypriots are gearing up for a presidential runoff on Sunday, barely seven months after the latest failure to reunify the eastern Mediterranean island nation of Cyprus.

President Nicos Anastasiades of Greek Cypriot Administration, internationally recognized as the Republic of Cyprus founded in 1960, is looking to reprise his triumph over left-leaning Stavros Malas in 2013 when the two men faced each other. Earlier polls had shown Anastasiades beating Malas convincingly in Sunday's runoff, but Malas' strong showing in last weekend's first round of voting might make it a closer race.

Voters are skeptical about whether anyone can lead them out of the labyrinth of the decades-old division with Turkish Cypriots.

Cyprus was divided into a Greek south and a Turkish north in 1974 when Turkey conducted a military intervention following a coup by supporters of union with Greece. The Turkish Republic of Northern Cyprus (TRNC), proclaimed in 1983, like its predecessor, Turkish Federated State of Cyprus, is only recognized by Turkey.

Anastasiades, 71, who says it will be his last term in office if re-elected, is counting on his track record of turning the economy around after a 2013 financial crisis that saw unemployment soar and salaries slashed. He has also been trumpeting his role in steering peace talks with Turkish Cypriots farther than anyone else since the 1974 split.

By contrast, the 50-year-old Malas is hoping his relative youth will strike a chord with the 550,000 eligible voters, many of whom are disillusioned by the acrimonious breakdown of the latest round of peace talks and years of economic uncertainty that's shaken the confidence of the middle class.

Anastasiades and Malas secured 35.5 and 30.2 percent of the vote, respectively, in the first round, setting up potentially a tighter than anticipated final vote.

Both were busy trying to reach out to the supporters of candidates that have been eliminated, notably those of the center-right Nicholas Papadopoulos, son of late former President Tassos Papadopoulos, who came in third with more than 100,000 votes — or 25.7 percent of the vote.

Nicholas Papadopoulos backs a tougher approach to the peace talks, arguing that both final candidates have been willing to make too many concessions to Turkish Cypriots. Papadopoulos and the coalition that backed him have decided not to endorse either candidate in the runoff.

Conscious of Papadopoulos' sizeable voter support, Anastasiades and Malas have sought to ease concerns about how far they're willing to go in peace talks. Both insisted that they wouldn't agree to a Turkish demand to incorporate military intervention rights and a permanent troop presence into any peace deal.

Turkey's intentions on Cyprus lie at the root of Greek Cypriot fears, and political leaders broadly agree on the need to lift Ankara's hand from a reunified Cyprus. Anastasiades has repeatedly said that Turkey wants to turn the island into its "protectorate." Whereas Turkey has repeatedly accused Greece and Greek Cypriots of hampering peace talks through irreconcilable demands as Turkish Cypriots already suffer from trade and movement restrictions.

A recent opinion poll found that nearly 90 percent of Greek Cypriots don't believe there will be an agreement any time soon.

Aiming to keep hopes for peace alive, both candidates said among their first acts in office if elected would be to approach Turkish Cypriot President Mustafa Akıncı in hopes of reviving negotiations.

Most voters who supported Papadopoulos will cast their ballots for who they consider the least worse candidate, political analyst Giorgos Kentas said.

With both Anastasiades and Malas perceived to be on the same page regarding peace talks, voter preference may boil down to which candidate voters trust most to deliver the most benefits from an economy on the mend.

Anastasiades says a Malas presidency will bring in a period of overspending that will hobble the economy once again.

Malas argues that Anastasiades has little credibility — the incumbent backtracked in 2013 and accepted a rescue package from creditors that forced the seizure of savings over 100,000 euros in Cyprus' two largest banks.

He also says Anastasiades' fiscal policies are geared toward the wealthy rather than ordinary households that aren't reaping the benefits of an economy growing at around 4 percent, one of the highest in Europe.