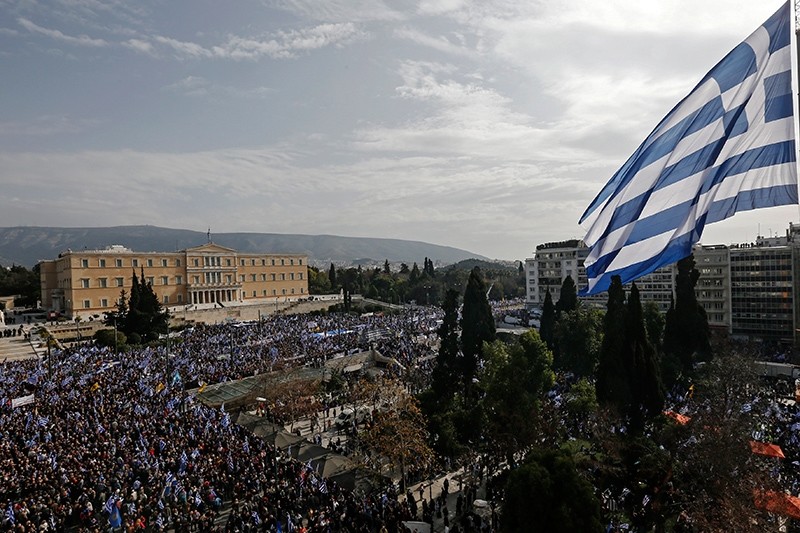 A giant Greek flag hangs from a crane waves over protesters during a rally over name dispute with Macedonia in Athens, Greece, Feb. 4, 2018. (EPA Photo)
by Compiled from Wire Services Feb 04, 2018 12:00 am

Tens of thousands of Greeks staged a mass rally in Athens Sunday, urging the government not to compromise in a festering name row with neighboring Macedonia.

Organizers claimed some 1.5 million people from across Greece and the Greek diaspora turned out to express their opposition to attempts by Prime Minister Alexis Tsipras' government to broker a deal.

Hundreds of buses were chartered to bring protesters from across the country to the Greek capital, while more were arriving on ferries from the islands. Police were halting traffic along major avenues in the city center, while vendors were setting up stalls selling Greek and Byzantine flags.

The more than quarter-century dispute broke out after Macedonia gained independence from Yugoslavia in 1991. Greece argues use of the name implies territorial claims on its own province of Macedonia, home of one of the most famous ancient Greeks, Alexander the Great.

Officials in Skopje counter that their country has been known as Macedonia for a long time.

"Macedonia is Greek and only Greek," the crowd chanted. People arrived in Athens for the rally from across the country, many coming by buses organized for the protest, state TV ERT reported.

"We will never allow another country to carry the name Macedonia in any form," Greek composer Mikis Theodorakis, 92, told the protesters. Theodorakis composed the national anthem, but may be best known for the score of the iconic film "Zorba the Greek."

The protest was called by nationalist organizations and endorsed by rightist politicians and part of the Greek Orthodox clergy.

A rally last month in Thessaloniki, the capital of the province Macedonia, drew more than 100,000 demonstrators.

U.N.-brokered negotiations were fruitless and the row has cost Macedonia membership in NATO and progress toward the European Union, as Greece blocked both.

A change of leadership in Skopje last year and the arrival of the moderate Social Democrat Prime Minister Zoran Zaev, however, provided a new momentum.

Several protesters wore traditional garb, including the uniform of Greek guerrillas who fought Bulgarian bands and Ottoman forces in Macedonia in the early 20th century.

"Cretan eagles lie in the earth of Macedonia," a Cretan representative told the crowd. "We tell our sister, Macedonia, we will not allow anyone to carve you up."

The protest -- the second on the Macedonia issue in a fortnight -- was organized and funded by Greek diaspora groups, with the support of retired officer associations, cultural unions and church groups.

Anarchists stationed a counter-protest nearby, with riot police deployed to keep the two crowds apart.

Two weeks ago, tens of thousands had protested in Thessaloniki, the capital of Greece's Macedonia region. Police had estimated the turnout at over 90,000, while organizers claimed at least 400,000 attended.

The dispute has remained unresolved since the former Yugoslav republic's independence in 1991.

Greece considers the name "Macedonia" to be part of its own cultural heritage, as the province was the core of Alexander the Great's ancient empire.

Athens seeks guarantees that the use of the name by its neighbor implies no claim to parts of its own territory.

The government has accused far-right hardliners and the neo-Nazi Golden Dawn party of trying to exploit the issue.

The government insists the rallies will not affect its determination to solve the issue and boost stability in the often tense Balkan region.

Athens says it is ready to accept a composite name that will establish a clear distinction from Greek Macedonia.

"The government is trying to give a patriotic solution to a problem that has troubled the country, its international relations and its diplomacy for over 25 years," government spokesman Dimitris Tzanakopoulos said Sunday.

Because of Greece's objections, Macedonia in 1993 joined the United Nations as the Former Yugoslav Republic of Macedonia (FYROM).

A resolution of the issue is needed before Macedonia can join NATO or the EU.

"They seek to join NATO and the EU with our own vote, so they can threaten us tomorrow from a position of strength," Theodorakis said.

Greece in 2008 threatened to veto Macedonia's NATO entry. Skopje subsequently took the issue to the International Court of Justice, which said Athens had been wrong to block its land-locked neighbor's aspirations.