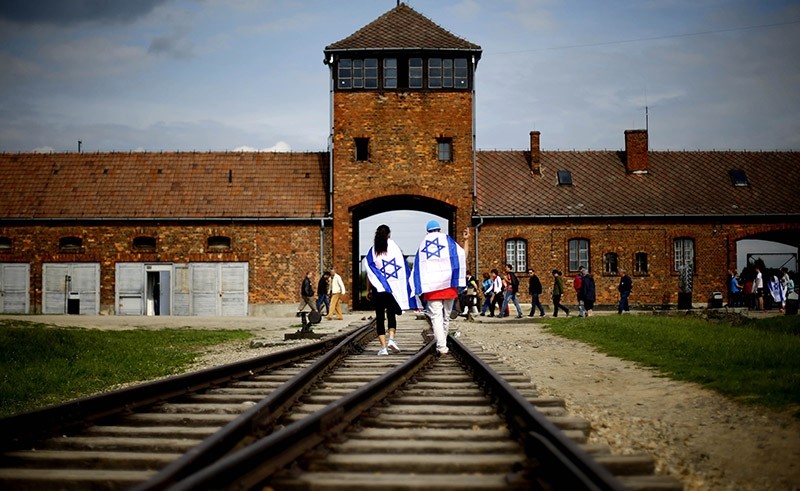 This June 25, 2015 file picture shows Brzezinka or Birkenau nazi death camp near Oswieciem, Poland, when young visitors with Israeli flags walk on railway tracks on the grounds of the former German Nazi death camp Auschwitz-Birkenau. (AP Photo)
by Feb 06, 2018 12:00 am

Poland's president said on Tuesday he will sign into law a bill imposing jail terms for suggesting the country was complicit in the Holocaust, defying criticism from Israel, the United States and activists.

Andrzej Duda said in a televised address the legislation would ensure Poland's "dignity and historical truth".

Poland's right-wing government says the law is needed to protect the reputation of its citizens and make sure they are recognized as victims not perpetrators of Nazi aggression during World War Two.

Israel has said the law would curb free speech, criminalize basic historical facts and stop any discussion on the role that some Poles played in Nazi crimes. Activists say the passage of the bill has encouraged a rise in anti-Semitism.

More than three million of Poland's 3.2 million Jews were murdered by the Nazis, accounting for about half of the Jews killed in the Holocaust. Jews from across the continent were sent to be killed at death camps built and operated by Germans in Poland, including Auschwitz, Treblinka, Belzec and Sobibor.

The Polish measure would impose prison sentences of up to three years for mentioning the term "Polish death camps" and for suggesting "publicly and against the facts" that the Polish nation or state was complicit in Nazi Germany's crimes.

President Duda said the bill would protect Poland's interests "so that we are not being slandered as a state and as a nation. But it also takes into account the sensitivity of those for whom remembering the Holocaust is extremely important.

He added that he would ask the Constitutional Tribunal for a number of clarifications about the bill. Those would likely be issued after it goes into effect. The legislation provides exemptions for research and art.

Israel's education minister said on Monday he was "honored" Poland had cancelled his visit to Warsaw this week because he refused to back down from condemning the bill.

"The blood of Polish Jews cries from the ground, and no law will silence it," Bennett later said in a statement.

According to figures from the U.S. Holocaust Memorial Museum, the Nazis also killed at least 1.9 million non-Jewish Polish civilians.