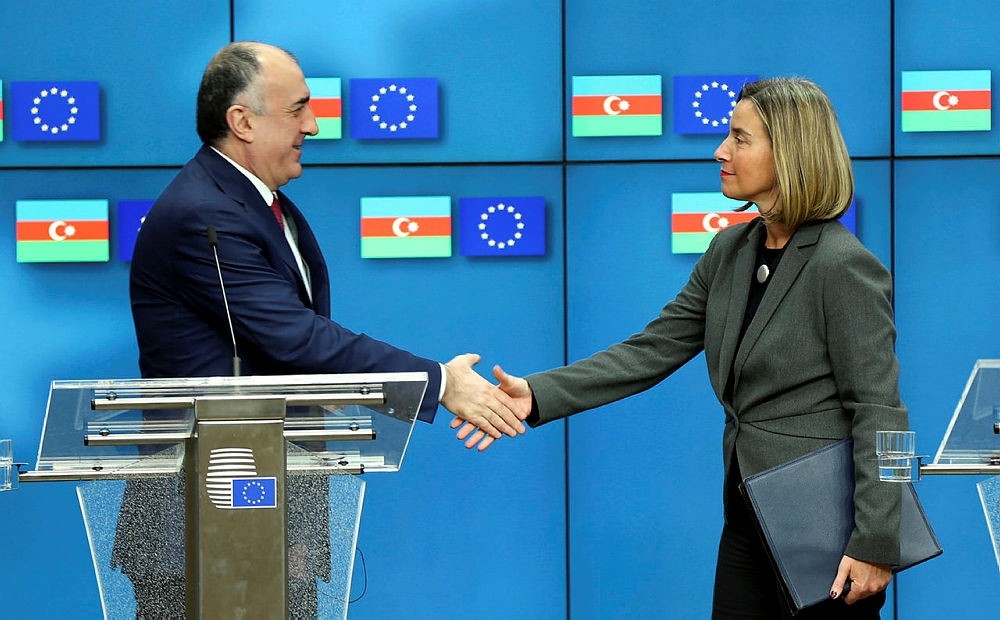 "The status quo, we believe, is unsustainable and the conflict does not have a military solution," Mogherini said at a news conference with Azerbaijani Foreign Minister Elmar Memmedyarov, who attended 15th Cooperation Council between the EU and Azerbaijan in Brussels, according to a EU statement.

Mogherini said the EU "fully" supports the mediation efforts and proposals of the Organization for Security and Cooperation in Europe's (OSCE) Minsk group co-chairs and confidence-building measures.

The Minsk group was formed to find a peaceful solution to the conflict between the two countries.

Memmedyarov said the unresolved conflict with Armenia was one of the "biggest" challenge, which Azerbaijan faces.

"We recognize that the conflict must be solved. First of all, based on the, of course, territorial integrity of my country," he said.

Occupied Karabakh is recognized as Azerbaijani territory by the international community but was taken over by Armenian secessionists as the Soviet Union broke up in the late 1980s.

Karabakh broke away from Azerbaijan in 1991 with Armenian military support, while a peace process has yet to be implemented.

Mogherini said Azerbaijan was an "important" partner for the EU, which supports the country's independence, sovereignty and territorial integrity.

She said "close" contacts were illustrated by the fact that the EU was Azerbaijan's largest economic partner, representing nearly half of the trade of the country — 48.6 percent — and the EU was also the largest foreign direct investor in Azerbaijan.

"The Southern Gas Corridor is just one example of our strategic relationship in the field of energy that serves the interest of both Azerbaijan and the EU," she added.

The Southern Gas Corridor — which plans to carry Azarbaijani gas all the way to Italy — is considered critical for Europe's future energy needs and for lowering dependence on Russian gas.

Memmedyarov expects the inauguration of TANAP will be done in 2017.