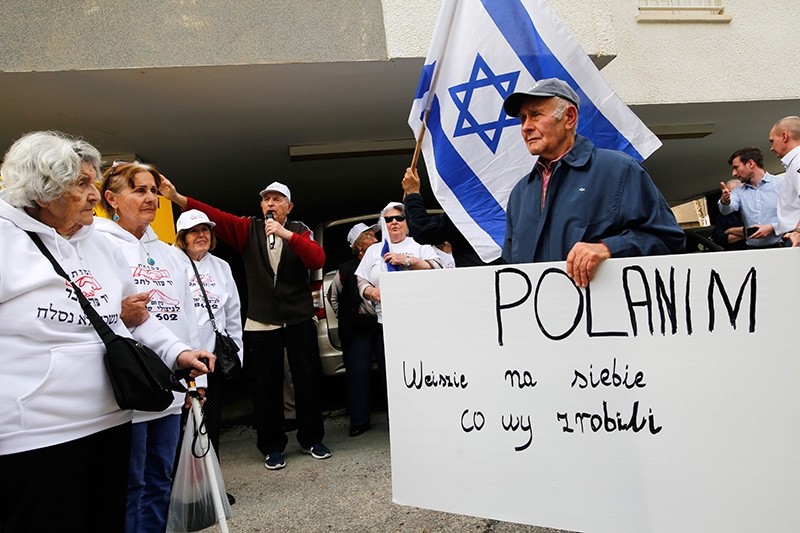 Holocaust survivors hold banners and wave an Israeli flag during a protest in front of Polish embassy in Tel Aviv on February 8, 2018, against a controversial bill passed by the eastern European country's senate. (AFP Photo)
by Associated Press Feb 10, 2018 12:00 am

An adviser to Poland's president has said he thinks Israel's negative reaction to a law criminalizing some statements about Poland's actions during World War II stemmed from a "feeling of shame at the passivity of the Jews during the Holocaust."

Andrzej Zybertowicz, a Nicolaus Copernicus University sociology professor who also serves as a presidential adviser, said in an interview Friday that Israel's opposition to the new Polish law is "anti-Polish" and shows the Mideast country "clearly fighting to keep the monopoly on the Holocaust."

"Many Jews engaged in denunciation, collaboration during the war. I think Israel has still not worked it through," Zybertowicz said in the interview published in the Polska-The Times newspaper.

Zybertowicz could not immediately be reached for comment. Polish public officials typically have the chance to review their statements before media outlets publish them. Zybertowicz tweeted a link to the article Friday.

His remarks follow open expressions of anti-Semitism that surfaced online and in some government-controlled media when Israeli officials objected to the bill form of the law, which outlaws public statements that falsely and intentionally attribute Nazi crimes to German-occupied Poland. Amid the crisis there has been a wave of accusation against Jews in Poland, even from state officials.

Jews have sometimes been described, often for the purpose of assigning blame or inflicting humiliation, as having acted passively in the face of the Holocaust. Key acts of resistance contradict the trope, most notably the Warsaw Uprising of 1943. Smaller revolts took place in death camps, including Sobibor and Treblinka, where starving prisoners without weapons faced heavily armed German guards.

In Israel, home to Holocaust scholars and families of survivors with roots in Poland, some fear Poland's law will allow the government to whitewash the role some individual Poles had in the deaths of the occupied country's Jews during World War II. The law allows for prison terms of up to three years.

Polish President Andrzej Duda and other government officials said it was needed because Poles are unfairly depicted sometimes as collaborators in the German genocide of Jews. They cite the expression "Polish death camps" as shorthand for the German camps on Nazi-occupied soil as an example.

Duda signed the law on Tuesday. But in a nod to the critics, he also asked the country's constitutional court to review it, leaving open the possibility the law could be amended.

Poland in fact was subjected to brutal occupation during the war, and the government at the time did not collaborate. It went into exile abroad while an underground army at home resisted the Nazis. There were, however, cases of Poles who identified Jews to the Germans or killed them directly.

"In this dispute, one can see clearly Israel is fighting to keep the monopoly on the Holocaust," presidential adviser Zybertowicz said in the interview. "The 'religion' of the Holocaust has become a symbolic shield for that country, which is used by Israel to create for itself a special position in many places in the world. A shield which is meant to protect Israel against any criticism."